The Trails series has found a home on PC platforms, and although fans have had to wait for the ports to make their way from PlayStation consoles, the series has seen historically strong ports. This is largely due to Peter 'Durante' Thoman and his company PH3 games. Durante, known for his work in the past on unofficial fixes of games like Dark Souls and Final Fantasy XIII, has continually put out well-received ports for the Cold Steel sub-series, as well as a fantastic update to the PC version of Ys VIII: Lacrimosa of Dana.

The Legend of Heroes: Trails of Cold Steel IV is no exception, once again receiving a solid conversion from PS4. Let's take a look at the system requirements, as listed on the game's Steam page.

For full impressions of the title, you can check out our review from last year's PlayStation 4 release.

These are practically identical system specs to the PC port for Trails of Cold Steel III, which isn't too surprising considering the two games are essentially a pair. That said, if you've played Trails of Cold Steel III on PC, you should already have a pretty good idea of what to expect from your rig in terms of performance here.

As usual, a modest PC system should be able to handle Trails of Cold Steel IV without too much issue at lower configuration specs. However, even a high-spec machine might struggle here & there with various options, as the port has several advanced configuration tools to mess with.

The config menu here is also nearly identical to the one seen for Trails of Cold Steel III, and it should look familiar if you've played other ports done by PH3. This style of menu is especially nice, as it gives quick explanations and even visual previews to each option you can set, as well as their relative requirements in turns of your system set up. You don't have to be intimately knowledgeable about all the various configuration options to get a good idea about how you want to set your game.

I've noticed two small additions that players can set that were not present in the Cold Steel III config menu. Firstly, a new SSAO option is available for ambient occlusion, for those who want to set an option not quite as taxing on your GPU as HBAO+. Similarly, a new 'higher distance' option is available for draw distance, sitting in-between 'console' and 'unlimited'. This is another good medium option for those who want to set it but with a lesser strain on your CPU. Otherwise, the other options seen in the config menu look to be the same as the previous entry.

The most taxing elements of the config are the PCSS shadow filtering options and high MSAA anti-aliasing. My setup is an NVIDIA GeForce RTX 2080Ti GPU with an Intel Core i7-7700k CPU. With this, I was able to achieve a 4K resolution and above 60 frames per second in most areas of the game with all settings set to their highest, except MSAA. Going up to MSAAx8 at 4K resolution can easily reduce your performance in open areas with a lot to render. Considering the game's relatively simple geometries, high resolutions with lesser anti-aliasing options still look quite clean if you need to knock down a setting or two.

An early patch for the game has already been released, reducing CPU usage in areas while also fixing some control & loading issues. Durante also noted a GPU quirk where clearing your shader cache can improve performance. Some people have noticed some issues with the latest patch affecting audio, so there are still some problems to sort out. In any case, it looks like the port is once again in good hands as the release continues to get polished post-launch.

One of the early village areas in the game is a good place to check your performance, as it contains several trees and foliage (and their shadows) to test your system. I've only had the game for a few days, so I can't comment on how later game areas might compare in terms of objects on screen, but the starting zone seems to be well-suited for this sort of testing.

Other quality-of-life components that were present in previous PC ports are still there, such as Turbo Mode functionality, the ability to load directly into your latest save file, and rebinding controller buttons or keyboard input. Notably, the Turbo mode function is now an on/off toggle rather than requiring you to hold down the button for full effect. I assume this was done to make it easier to set the toggle to L3/R3 buttons, but in any case you can rebind the controls however you like regardless, and it's just a small note to make.

In the end, Trails of Cold Steel IV is another great PC entry for the series, and hopefully that will continue to be the case as the series moves into its next phase. 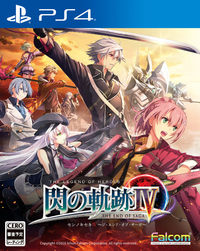