Made by indie dev GuruGuru, the game is set to release for Steam Early Access on May 13, priced at $24.99, followed by a Nintendo Switch version in 2022.

The original Getsu Fūma Den released for the original Famicom in Japan in 1987. Players who buy the Early Access version of Undying Moon will receive a Steam port of this original classic, along with a digital artbook and soundtrack.

A teaser trailer, press release in full, store page description, character bios, and screenshot set can be found below. An updated roadmap for upcoming content can be found here.

LOS ANGELES – April 14, 2021 – Konami Digital Entertainment, Inc. today announced a new title, GetsuFumaDen: Undying Moon, will be coming soon to Steam® via Early Access beginning May 13, 2021. During Early Access, the game will be available from $24.99 USD. It will also be arriving on Nintendo Switch™ in 2022.

Developed by indie studio GuruGuru, alongside Konami Digital Entertainment, GetsuFumaDen features roguevania 2D action with a stunning dark fantasy world, brought to life through the stroke of traditional Japanese art. Players will descend into the beautiful and harrowing Ukiyo-e style stages of the underworld while mastering an arsenal of weapons and equipment that can be paired to suit a variety of playstyles.

GetsuFumaDen features highly strategic combat based on the spacing and timing aspects unique to Japanese martial arts. Fearsome bosses and ever-changing layouts will challenge players while allowing them to grow stronger with each attempt.

After 1,000 years of peace, the seal to the gate of hell has been ripped open and a flood of evil spirits have been released into the world. As it stands at the brink of destruction, Getsu Fuma must take on the helm as the leader of his clan and delve into the pits of hell to rip out the evil at its core.

Shin Murato, Producer of GetsuFumaDen: Undying Moon at Konami Digital Entertainment Co. commented, “Having an Early Access period gives us a great opportunity to build a community for GetsuFumaDen and ensure the game is as strong as possible. Throughout this period, we want to utilise user feedback and foster an active discussion to increase the quality of the game. We will work very closely with our community to help bring this game to life through content review, bug fixes, and balancing. Our focus is on Early Access at the moment; we will share more details about Nintendo Switch in the future.”

“Working closely with KONAMI and bringing GetsuFumaDen to life is a thrilling project for us," said Yuki Yamashita, Director at GuruGuru. "We look forward to entering Early Access and actively working in partnership with the community on a title that speaks to our passion about design, visuals, and story. We're excited to hear the community's feedback with a goal to shape and evolve the game as we move forward in development.”

Avid retro fans may recall the original Getsu Fūma Den, released exclusively in Japan on Famicom systems in 1987. It is a 2D, side-scrolling action RPG, often praised for how it switches between 2D platforming and first-person, pseudo-3D style exploration. Users who buy the Early Access version of GetsuFumaDen will receive a port of the original Japanese Famicom edition as a bonus, along with a digital artbook and original mini soundtrack.

More information regarding GetsuFumaDen: Undying Moon will be available soon via the official website and social media channels.

As the chosen leader and guardian of the land of the living, wield the otherworldy arsenal and powers of the Getsu clan as you descend deeper into the depths of Hell to eradicate the source of the cataclysm.

Getsu Fuma, the 27th leader of the Getsu clan, is widely known for his heroism and talent. He ventures into hell in search of the cataclysm there as well as his missing brother. This is his duty as a leader and a member of the Getsu clan.

The 21st leader of the Getsu clan is known as the Getsu clan's greatest female ninja. It is said that all were smitten by her beautiful and talented body and mind. Her cries upon her death in hell reverberated all the way to the surface world.

*This character will be available as free downloadable content in June 2021. 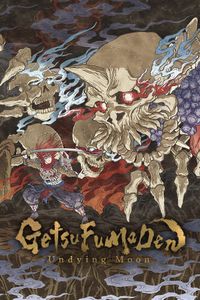