Publisher Gameforge and developers Wangyuan Shengtang & Aurogon have posted a new trailer and information for Swords of Legends Online, detailing the story and world of the upcoming MMORPG.

Experience first-hand the wondrous spectacle of a world inspired by ancient Chinese legend for the first time in the West in Sword of Legend Online, coming to Europe, North and Latin America thanks to prolific MMO publisher Gameforge and developers Wangyuan Shengtang & Aurogon. In today’s new video, players will get a look at the fascinating world and compelling story behind the breathtaking visuals and thrilling combat. The war between light and darkness rages on, and only the bravest heroes can reawaken the legendary swords and vanquish the evil that stains the land!

In the beginning, there was only chaos, and from chaos came Pingu, the creator of heaven and earth. Upon his death, Pingu’s remains transformed into two substances that would change the world: pure qi, and dark qi. From the pure qi came the gods of good, the virtuous Nüwa, the merciful Shennong, the god of death itself, Yama, and the god that would gift humanity superhuman abilities and immortality, Fuxi. Birthed from the dark qi was the plague goddess Jiegou, with her army of Blightbeasts and army of foul creatures of the shadow.

Humans are creatures that crave power, and thus the Ancestral Sword was forged, powered by the sacrificed soul of the original wielder’s brother. It was a weapon that was so devastating, so incredibly potent, that it could wound the gods themselves! This great act had unfortunate consequences, however, inspiring the wicked Longyuan Clan to sacrifice the souls of untold numbers of innocent victims to create the Seven Ancient Swords. These abominable weapons were so destructive that the blacksmith who created them was banished to the underworld, a realm of cold and ghosts.

Since then, many wars have been fought, many battles won and lost, but the memories of the gods and the mythical swords began to fade. The gods themselves have been silent for a long time, and the dangers of the past remain undefeated. A new generation of warriors must learn how to awaken the power of the ancient swords and finally put the evil powers of dark qi to rest! 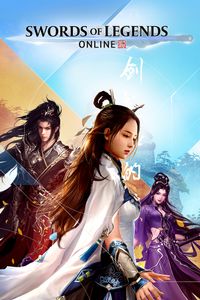