Ys: The Oath in Felghana now available on Steam

The remake of Ys III makes its way to Steam, marking Xseed's first foray into the platform.  Originally only available on PSP in the west, the Windows version is now available as well.

In addition to Oath in Felghana, Xseed will also be bringing Ys Origin to Steam.  Unlike the former, Origin has not been given an official English release.  There is currently no release date, but it is likely to launch later in the year.

As Xseed now has a prescense on Steam, there may be more publishers of relatively niche Japanese games jumping aboard, a trend arguably started by Carpe Fulgur with its translation of Recettear and more recently, Chantelise.  This will hopefully mean good things for fans of these types of games.

XSEED Announces Limited Edition for Ys: The Oath in Felghana

Ys: The Oath in Felghana 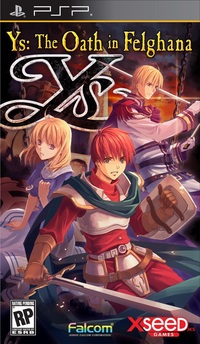