A new batch of pics for the 3DS remake of Devil Summoner: Soul Hackers have just been released.  An entry in Atlus' popular Shin Megami Tensei franchise; the game originally released on the Sega Saturn and Playstation back in 1997 and 1999 respectively.

Devil Summoner: Soul Hackers launches in Japan on August 30th.  No news on a western release has been announced at this time, but consiering Atlus' track record and the fact the game never saw an official English release, it may be a candidate for localization. 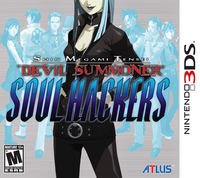