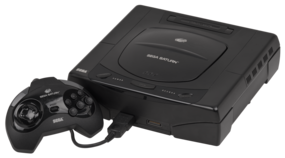 Most Sega video game consoles had code names based off planets of the solar system, but the Saturn is the only one to keep that title for launch. The first true successor to the Mega Drive, the Saturn was able to run high-quality ports of Sega's beloved Model 1 and Model 2 arcade titles, though it was ultimately discontinued after just a few years on the market.