Well everyone, it's that time again. Time for a game publisher to announce the next entry in a much beloved franchise, but to deliver more in line with what we have come to expect of this day and age.

Among the titles that Capcom announced today via 4Gamer and translated by NeoGAF include the release of Monster Hunter Frontier G for the PS3 and WiiU in Japan, Euro Historia for browsers (this one looks interesting), and finally, Breath of Fire 6 for browsers, iOS, and Android. It's an online touch-based RPG due for release next year where you can share your game progress across different platforms.

I guess it would be kind of cool if this was a story-driven game where you can hop into a friend's party at any time ala Secret of Mana, especially since Capcom have yet to use the words "casual" or "F2P" to describe it (not that those words are inherently bad), and the point about saving your progress in the game.

Is it too late to say that at this rate, we should just make the most of the situation?

None of the games have been announced for release outside of Japan. You can check out the first trailer for Monster Hunter Frontier G below.

Capcom announces a new demo and competition for Dragon's Dogma 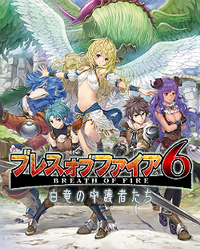