After an incredibly rough financial report last year that had an "extraordinary loss", resulting in the resignation of then-CEO Yoichi Wada, Square Enix can finally collectively wipe the sweat from its brow - for this last fiscal year features a return to profitability for them.

The financial report for the fiscal year ending 31st March 2014 sees the company posting a solid profit of ¥6.5 billion, translating, roughly, to $65 million. Net Sales for the year were up 4.8% on the disasterous 2013 fiscal year, and other areas, such as increases in operating income and a  ¥350 million windfall recieved "for the closure of an amusement facility" helped them achieve such numbers.

Another important factor was, of couse, Final Fantasy XIV: A Realm Reborn. The troubled MMO relaunched in this fiscal year with some solid success, and Square Enix describes its performance as favourable in its report. The digitial entertainment sector of the company - the one responsible for the subscriptions of titles like FF14 and DQ10 - saw net sales of ¥94,571 million, an increase of 5.7% on the previous year.

This is all good news. More interesting than this, though, are the forecasts for this fiscal year through March 31st, 2015, which provide a vital insight into what to expect from Square Enix in the coming year and beyond.

Noctis remains in the dark

Most notable of the predictions for next year to fans of Square Enix's major gaming output is likely the fact that their game unit saes forcast falls by a significant 5 million, dropping to 12 million units that the company intends to shift between now and March 2015. 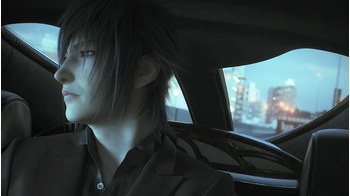 This journey is going to take a little while longer yet..
The implication for Final Fantasy XV is clear. Put simply, any year with a major Final Fantasy in addition to other titles would likely have a much higher target than that. The forecast for the 2010 fiscal year, Final Fantasy XIII's release year, for instance, had a bullish 13 million units in Japan alone, with the target of shifting an additional 6 and 7 in North America and Europe respectively.

If you thought you'd be seeing Noctis any time before March, even in Japan, consider this a cold bucket of water splashed over those expectations. Square Enix expect to sell 3.4 million units in Japan this year. North America will see slightly more, with 3.8, while if all goes to plan European markets will top that out with 4.8 million units moved.

However, the company is seeing significant growth in non-boxed products and digital-driven gaming. They mention that "new major titles" in the smartphone arena such as Hitman GO, Puzzle Bobble and Dragon Quest Monsters: Super Light provided major income this year. In the case of Dragon Quest, that Japan-only smartphone title has racked up over 5 million downloads since its launch.

"New major titles" for smartphones are "to be released shortly", too. This includes Final Fantasy Agito, a Type-0 spin-off that is described in the report as "a full-scale Final Fantasy". More smart phone titles are also to be revealed in the months ahead also, the company promised.

The report also takes several pages to outline the growing market for online PC and Mobile games in China, which is rapidly becoming a powerful emerging market in gaming. The first major Square Enix release that'll tackle that difficult-to-crack market will be A Realm Reborn. 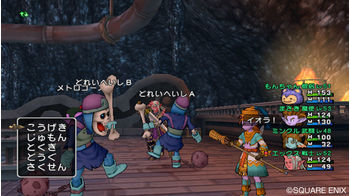 An overseas release for Dragon Quest's MMO is still under consideration, it seems.
The new version of Final Fantasy XIV will launch there this Summer in partnership with a Chinese company. Several other Square Enix titles, specifically for mobile, are also heading to China as part of expansion and China-geared partnerships.

Dragon Quest X also remains a focus. Square Enix mention that "expansion to overseas market is under consideration," and also note that they continue to develop the cloud services that allow players to experience the MMO from other devices. Originally conceived for tablets, the technology is now making its way to smartphones.

In addition to all this, the company also notes that in the next fiscal year after this one they intend to launch "large-scale online titles developed by Western studios." These releases are slated in the report as appearing after March 2015. Online is a big focus for the company, evidently.

Consistent growth in areas such as publication of books, arcade amusement machines - including a Square Enix/Taito designed cabinet based on Valve's Left 4 Dead series - and products such as action figures - will also help to keep the company ticking over.

Hopes for the next year

Despite all of the positive points above, Square Enix are realistic in casting the fiscal year ending March 2015 as a rough one. They predict almost every area of the business will be flat or down slightly on this year, an admission which caused their share price to tumble 10% in spite of these solid results this morning.

Forecasts can change, however, and frequently do - but this is a clear indication that we can expect this to be a quieter year for the house that Final Fantasy built.

The company has made great strides but evidently isn't quite off the rocky ground that saw it plummet to several billions of yen lost in 2013. The lower end of Square Enix's forecast would make next year its worst year in recent memory discounting 2013's incredible loss - but the high end of their forecast would place it above the lacklustre 2012. It's a close thing - and we'll bring you more news as it comes, as always.