Fuyru has detailed Legend of Legacy  quite a bit over on their Twitter feed as well as posting screenshots, which we have posted below. Battles will center around four major elements: water, wind, fire, and dark. Which elements are more powerful will vary over the course of the battle and is displayed on the bottom screen. Taking advantage of this dynamic system will be key to succeeding in battle.

Furyu also uploaded a short clip showing the mapping system in the game, where the lower screen fills in as you explore.

Legend of Legacy  releases in Japan on January 22nd. 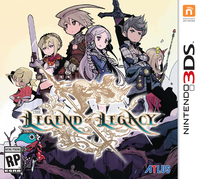