Get a Slime with this Dragon Quest Heroes Collector's Edition

Following an earlier leak, Square Enix has now confirmed that Dragon Quest Heroes: The World Tree's Woe and the Blight Below is coming to the Playstation 4 on October 13 in North America.

Additionally, the special Slime Collector's Edition for the game has been revealed. It will only be sold at the Square Enix Online Store. 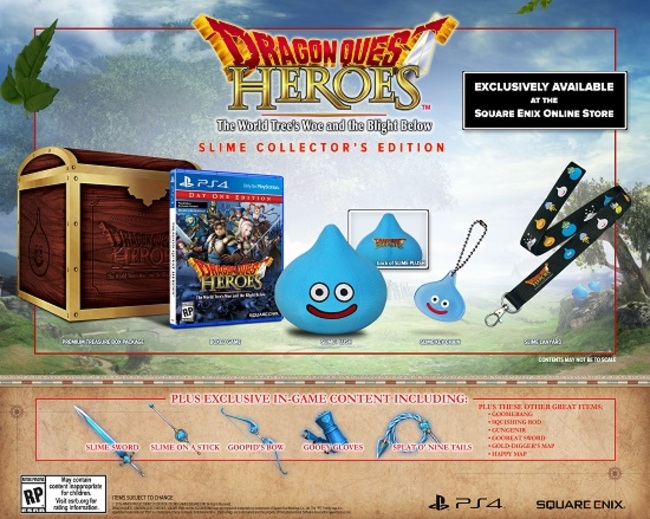 First-print copies of the game, known as the Day One Edition, all include helpful Slime-themed downloadable content for characters to equip including: Slime Sword, Gooey Gloves, Goomerang, Squishing Rod and Gungenir.

Square Enix gives a brief rundown on what Dragon Quest Heroes: The World Tree's Woe and the Blight Below is all about.

When a dark shockwave sweeps through the city of Arba, the monsters that once lived alongside the people in peace are driven into a frenzied rage. As either the hero, Luceus, or the heroine, Aurora, the player joins forces with a cast of iconic cast from previous DRAGON QUEST titles, such as Alena, Bianca and Yangus, to bring the rampaging hordes of monsters to their senses and to restore order to the kingdom.

The Slime Collector's Edition is now up for pre-order on the Square Enix Online Store here for $99.99 and the Standard Edition will cost $59.99 both at retail and PSN.

Returning West: An Interview with the Developers of Dragon Quest Heroes

Dragon Quest Heroes: The World Tree's Woe and the Blight Below