Nintendo and Level-5 have posted new screenshots, details, and a trailer for Yo-Kai Watch, which will be hitting western shores more than two years after its original release in Japan.

Yokai Watch is set for a Holiday 2015 release in North America, and a 2016 release for Europe. As always, take a look at the information and media posted below.

After selling millions and being a cultural phenomenon in Japan, YO-KAI WATCH is coming to the United States for the Nintendo 3DS family of systems. The YO-KAI WATCH game is about hundreds of sometimes cute, sometimes spooky, and usually mischievous Yo-kai that inhabit our world. Yo-kai are not ghosts, monsters or creatures. Yo-kai are, quite simply, Yo-kai. They cannot be seen by the human eye, but they are everywhere. Whether born from the soul of a deceased human, or an everyday object discovering its higher purpose, their personalities are distinctly humanlike.

As you explore the world, use your Yo-kai Watch to find them, befriend them, and turn them into a team to battle other Yo-kai. Befriending new Yo-kai may not be so easy, though – in many cases, you will need to battle with them and impress them during your battle. Each Yo-kai has its own unique skills and strengths and you’ll use them to challenge the evil Yo-kai and help people in need of solving daily problems – like an argument with a friend or forgetting something important – which may be caused by mischievous Yo-kai hidden everywhere.

• With the power of the Yo-kai watch, find and befriend more than 200 hidden Yo-kai, found everywhere in the world, and call upon their powers when you need their help.

• Assemble a team of six Yo-kai in your watch to defeat evil and help people.

• Each Yo-kai has its own unique skills and strengths, so use strategy to assemble your team to address different problems and fight different evil Yo-kai. 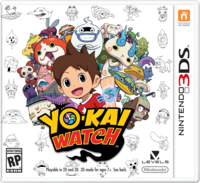