Gust has posted a second full trailer for crafting-JRPG Atelier Sophie, showcasing a fair amount of gameplay this time around. The footage shows some crafting and combat as we are introduced to many of the game's playable characters, including the recently revealed Julio, Fritz, and Leon.

See the trailer below:

Atelier Sophie was delayed about two months in Japan and will now release on November 19th for PlayStation 4, PlayStation 3, and PlayStation Vita.

Update: New screenshots have been posted, showing both new and previously revealed characters. Makelet and Atomina are a mysterious pair of children who appear before Sophie, and are knowledgeable about alchemy. Their motives are unknown, and speak in very wise ways despite their appearance. Tess Heitzmann is a somewhat simpled-minded cafe clerk, although very hard working.

There are also images detailing “Group Requests” - a quest system where Sophie and party are tasked to battle certain enemies and  collect materials for rewards.

Another trio of characters revealed for Atelier Sophie

Atelier Sophie: The Alchemist of the Mysterious Book 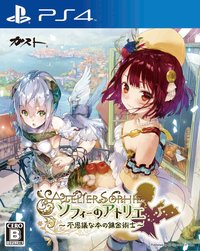