First look at Nippon Ichi's Coven and Labyrinth of Refrain

Teased for several months now, Nippon Ichi has revealed a new first-person dungeon crawler, featuring the art of Takehito Harada - best known for the Disgaea series. Titled Coven and Labyrinth of Refrain, this RPG is set to release on PlayStaiton Vita in Japan on January 28th next year.

The setting of the game is a town called Refrain, which is home to a haunted underground labyrinth.  A dusk witch named Doronia and her apprentice Luka appear in the town to investigate.

The book Luka holds is known as the Cursed Book Rekitei, and together with the witch, 'Dolls' will be created as your battle party in the labyrinth. The party is separated into five "covens' - groups that can have up to three Dolls in each as direct battle participants.

However, each coven is also said to hold up to five additional dolls that can be involved in supporting roles, for a total of 40 characters in battle, but the details are yet unclear.

Check out the teaser trailer and images below. The gallery includes artwork for both the well-balanced Astra Knight and evasive Shinobi classes - male and female.

Coven and Labyrinth of Refrain Screenshots and Artwork

Labyrinth of Refrain: Coven of Dusk 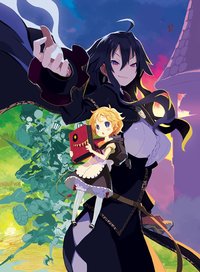