Nintendo's European branch has a small treat in store for Zelda fans to apologize for delaying The Legend of Zelda's latest full outing on Wii U - two classic Zelda adventures that launch on the European Nintendo eShop immediately.

Between now and November 19th, players who purchase one of these two games for €9,99/£8.99 can pick up the other for half price if purchasing on the same Wii U console.

The two games form part of what is ultimately the Wind Waker trilogy, picking up the story where that title left off. The first of the two games sees Link having to rescue a kidnapped Tetra once again, while the second takes place some time in the future where the descendent of Wind Waker's Link and Zelda have founded a new Hyrule which happens to have a nifty train-based transportation - no horses or boats required!

Nintendo of America made no reference to these releases in their Direct presentation, so one can safely assume they won't be coming to North America for a while. European fans can have at it from now, though, so get booting up your Wii U. Today also heralded the arrival of news on The Legend of Zelda: Twilight Princess HD and a further update on the Wii U Zelda title, which you can read through here.

The Legend of Zelda: Phantom Hourglass 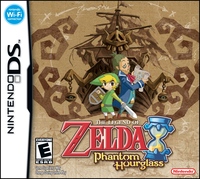