Announced at last year's Tokyo Game Show, Square Enix has updated the official website for Seiken Densetsu: Final Fantasy Gaiden - a remake of the original Seiken Densetsu for mobile phones - opening a fully English half of the website. Titled Adventures of Mana, you can now read the translated story premise and character bios, and there are also English screenshots.

While the game has not been officially detailed for the West yet, a trademark for 'Adventures of Mana' was made in Europe late last year.

However, while the game is also set to release on PlayStation Vita in Japan, no PlayStation logo can be spotted on the English website pages, indicating the game's potential localization may only be for mobile devices.

We've collected some of the screens and art into the gallery below. Visit the official website to see more.

Adventures of Mana Screenshots and Artwork 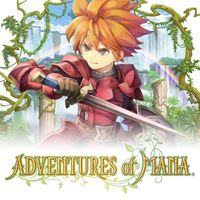