Dragon Ball Xenoverse 2 revealed for PS4, Xbox One and PC

Bandai Namco has revealed the latest video game installment in the storied Dragon Ball franchise with Dragon Ball Xenoverse 2 - due for release on PlayStation 4, Xbox One and PC later this year in North America and some time later in Europe.

Following its predicessor, Dragon Ball Xenoverse 2 promises to build on the original game with enhanced visuals and new gameplay features. Bandai Namco is touting it as the "largest and most detailed Dragon Ball world ever developed" with a new hub city, even more character customization options and other new features and upgrades. The company plans on providing further details next month during E3 2016, which runs from June 14 through June 16.

The first trailer has been released online - teasing "outcomes you wished were different." This concept is somewhat different to the original Xenoverse, which saw players creating a character of their own to team up with Future Trunks to repair disruptions in the existing Dragon Ball timelines and stop villains Towa, Mira and Demigra. 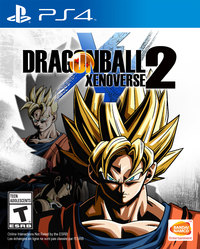