It’s been awhile since the west last saw a video game that tied into the Fate series. Last seen in November 2011 with Fate/Extra on the PlayStation Portable, western fans have been left wondering if they would ever get the chance to play another one of these games in English. After all, Fate/Extra’s sequel, Fate/Extra CCC, was never brought overseas after its March 2013 launch in Japan.

Five years later, XSEED Games announced that they’re bringing over Fate/Extella: The Umbral Star to the PlayStation 4 and PlayStation Vita just mere days before the start of E3 2016 and that it would be playable on the show floor. Being an avid fan of the series itself, I absolutely had to check it out.

Before digging into the specifics, it’s important to note that Fate/Extella is its own separate entity inside the Fate series; it should not be treated as a direct sequel to Fate/Extra or Fate/Extra CCC, though it shares many of its characters and even the initial backdrop of it. Therefore, newcomers to the franchise shouldn’t feel pressured to consume every bit of relevant Fate media prior to this game.

Unlike the PlayStation Portable turn-based RPGs before it, Fate/Extella is an action game in the same vein as Dynasty Warriors and Sengoku Basara depicting the frantic one-versus-many style. I’m still not sure if it’ll inherit some RPG elements from the Fate/Extra series, but I did notice a level meter below the KO counter that leveled up my character over the course of the showcased level. 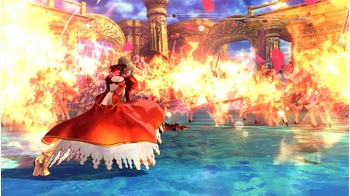 Nero makes quick work of her enemies by roasting them.
The Fate/Extella demo let me take control of Nero Claudius, the main Saber-class Servant in Fate/Extra. She arrives onto a vibrant battlefield filled with Edo Period structures connected by vast red bridges and cherry blossom trees sprinkled throughout. Its visual presentation particularly stood out to me right away; there was a nice sense of atmospheric tranquility among the chaos.

With the initial tutorial messages out of the way, my main objective was clear enough – conquer Sectors throughout the battlefield to gather a total of 15 keys. Doing so would complete the Regime Matrix and in this case, open a portal to the stage’s final boss, the adorable pink-haired Tamamo no Mae from Fate/Extra. Each Sector is worth a different amount of keys, so I had to make sure to collect 15 of them efficiently before the enemy did.

What shocked me right away was how smooth Fate/Extella ran. XSEED Games had the PlayStation 4 version on display and it held a consistent 60 frames per second despite the massive amount of enemies on screen being slaughtered by Nero’s flashy sword skills. It felt awesome dashing around through hordes of foes in combat with no awkward or jarring stuttering. I particularly liked the ripple effect that followed Nero’s weapon in some of her attack patterns.

Controls were responsive as I mauled down the opposing force switching up light and heavy attacks; different heavy attacks would be executed depending on where they’d be activated down the chain of light attacks. Though battles carried a frenzied pace to them, there was never a time I felt as if I couldn’t keep up. Things remained snappy through and through.

Speaking of pacing, Fate/Extella has an interesting quirk that kept me engaged in combat all the time. Instead of running over from one zone to the next, there are portals between zones that Nero can fly through to immediately travel to them. I thought this was a pretty thoughtful idea to help keep the tempo of combat throughout the entire stage, instead of having to spend a handful of downtime going on a slog from one region to another. 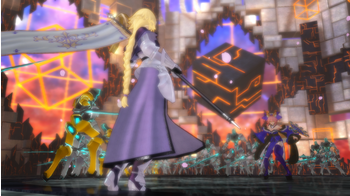 Characters from other branches of the Fate series will also be in Fate/Extella!
Underneath Nero’s health bar was a separate blue gauge divided into six slots. Instead of the traditional special attack found in other similar games of the genre, Fate/Extella utilizes this gauge for its Extella Manuever mechanic. Activating it changes the environment around Nero temporarily into a virtual one consisting of azure squares and cubes, much like the Arena areas in Fate/Extra. This allows Nero to perform a sequence of attacks on groups of enemies; attacking consecutive batches of enemies consumes more slots on that blue gauge.

Another offensive tactic at Nero’s disposal was her Form Change ability. Once a meter filled up, Nero was able to don a fiery suit of armor after a flashy transformation cutscene. Not only does it change her appearance briefly, it alters her moveset as well. She exchanges her sword for a massive set of gauntlets and heels showered in flame!

Other characters made brief appearances in my time with the game. Killing the leaders of a Sector, called Aggressors, would usually conquer that area, but sometimes other Servants show up to challenge you. Gilgamesh from Fate/stay night and Elizabeth Bathory from Fate/Extra CCC stopped by to greet Nero and I at the appropriately named Servant Slammer regions. Doing combat with them was a lot of fun, especially since it gave me a bit of insight into how they would play in the full release.

Other systems were also present at Fate/Extella’s E3 gameplay demo. Consumable items are mapped to the D-pad that healed my health or buffed my defenses momentarily. Gathering three pieces of a certain item allowed Nero to execute her Noble Phantasm, an ultimate attack, to annihilate everything around her.

I enjoyed my time with Fate/Extella: The Umbral Star. Its fluidity in handling the hectic battle system was a pleasant surprise and even though it’s not a turn-based RPG like the Fate/Extra series, I’m still greatly looking forward to it. Fans of the Fate series have a lot to look forward to in this game, but I think newcomers should also give Fate/Extella a shot if they’re fans of action games that have a lone character beat down armies of enemies in a flash.

Fate/Extella: The Umbral Star launches in Japan on November 10 while the North American release is coming out sometime this winter. 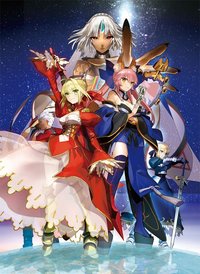