Fire Emblem Heroes aims to take the strategy RPG layer of the core Fire Emblem games and streamline it some, all while giving you access to a pool of Fire Emblem's greatest heroes to play with. The idea is simple: build an all-star army from your very favourite Fire Emblem characters - even if in-universe it'd be impossible for them to battle together. The characters will be depicted with all-new art by a variety of artists and have all-new voice clips to accompany their appearance.

You play a 'summoner', and that's how you bring in classic heroes - you summon them. Like the surprisingly good Final Fantasy Record Keeper (which incidentally is also from DeNA, who are partnered with Nintendo on this title), this appears to be a gacha-based game, with players drawing heroes at random to join their army. Heroes have different rarities, and while you'll be able to draw many for free, you'll also have the option of doing more draws by playing. As many of you no doubt know, this is a pretty popular format for mobile games in Japan.

In battles, Heroes seems to present your full battlefield on your mobile screen, allowing you to swipe units about its grid-based layout in order to attack and flank enemies, and the classic FE weapon trifecta of Sword/Fire beats Axe/Wind beats Lance/Thunder beats Sword/Fire returns. It looks like a pretty smartly streamlined version of FE's battles based on screens.

We can't wait to try it, and we won't have to wait long - the game will launch on Android in February, with iOS following shortly after that.

Nintendo has launched a pre-registration website and also has a campaign where fans can vote on their favourite heroes that'll feature in the game. 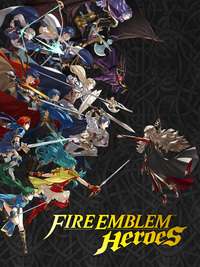