UPDATE: Dengeki has published the world premiere gameplay footage of the demo build that will be also playable at gamescom 2017. You can watch it at the end of this article.

Earlier this week, Bandai Namco Europe had published an English teaser of a brand-new game codenamed Projekt 1514, and not much information was divulged other than a mysterious FB logo, and that this game is being developed by Dimps.

And today in Japan, Bandai Namco has just officially announced through Dengeki that the game is being revealed as Sword Art Online: Fatal Bullet. 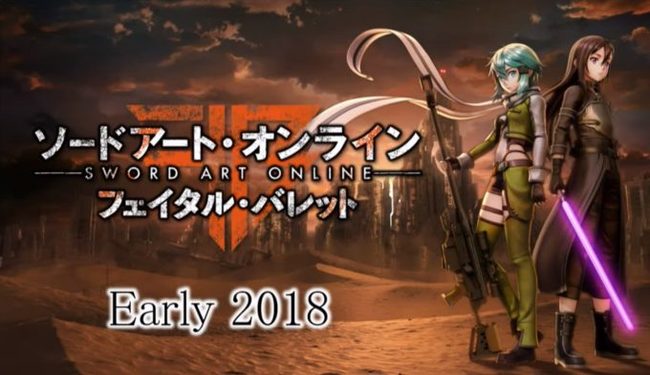 Some details about the game are also announced through an official live stream, which has also been summarized by Games Talk. Sword Art Online: Fatal Bullet is based on Gun Gale Online, the fictional VR MMO game where the Phantom Bullet arc takes place in the original novel. This game is being developed in Unreal Engine 4 and its genre will combine TPS (Third Person Shooting) with RPG. Fatal Bullet will have a brand-new story which is totally different from the anime, so players will be able to have a brand-new experience in the world of Gun Gale Online.

There are various weapon types available, which include Photon Sword, Gatling, Sniper Rifle, Grenade Launcher, and Assault Machinegun. Other than the main characters Kirito and Sinon, more characters like Asuna, Leafa, and Yui will also make an appearance here. Sword Art Online's author Reki Kawahara is also supervising the game, with decisions such as determining the weapon types to be assigned to each character.

Bandai Namco Europe has also published the official English trailer, which you can watch after the press release.

SWORD ART ONLINE: FATAL BULLET - Your Choice Is Heavier And Faster Than A Bullet. #Projekt1514 has been finally unveiled. BANDAI NAMCO Entertainment Europe are proud to announce the new instalment of one of the most beloved anime series - Sword Art Online: Fatal Bullet. Developed by Dimps studio, Sword Art Online: Fatal Bullet will be available Early 2018 on PlayStation 4, Xbox One and PC. Become the hero of Gun Gale Online, stepping into the versatile landscapes and environment of a visually, enhanced digital world. Interact with characters from the original novels, previous games and anime. Play as the protagonist, fighting against opponents using new weapons whilst further customising gameplay, creating skills and abilities.

Sword Art Online: Fatal Bullet is going to be released worldwide for PlayStation 4, Xbox One, and Steam in Early 2018. Other than Japanese and English, Chinese and Korean announcements for the game have also been made.