Fire Emblem Warriors Gamescom trailer published, will be out October 20 in Europe

Nintendo and Koei Tecmo have published a new trailer for Fire Emblem Warriors at Gamescom 2017 in Cologne, Germany, which confirms the addition of more new characters, as well as revealing the Western release date.

More new characters confirmed appearing in this game are Hinoka, Takumi, Camilla, and Leo from Fire Emblem Fates, joining Corrin (Female), Ryoma, and Xander which have been revealed previously. Interestingly, the youngest sisters Sakura and Elise have not been revealed yet, so we wonder what happened with both of them.

UPDATE: Nintendo has also announced that Europe will be getting a Limited Edition for Fire Emblem Warriors, which includes 3 CDs of the Original Soundtrack as well as Character Cards. However, when compared with Japan's limited editions, this will be lacking the artbook from the Premium Box and the elusive Dragonstone Crystal from the Treasure Box. 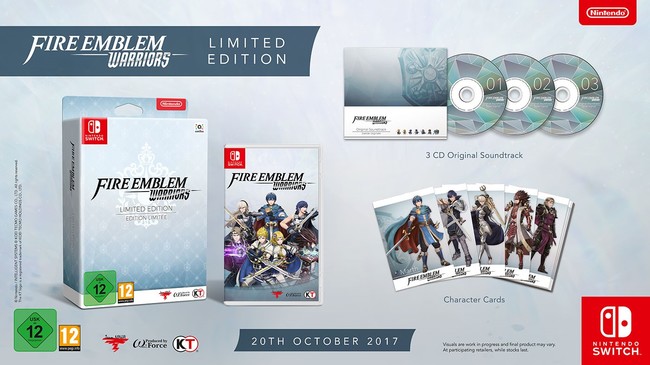 Fire Emblem Warriors, which will be released for Nintendo Switch & New Nintendo 3DS in Japan and Asia on September 28, has also been revealed to be out in Europe on October 20. For those who prefer Japanese voices, you can also watch the Japanese version of the trailer below.