Capcom's highly anticipated game Monster Hunter: World had its first ever playable demo available at Gamescom 2017 in Germany last week, and even the Japanese media are having a blast with the demo and have just recently put up extensive coverage on their sites. One such outlet, Gamer, has even posted an extensive interview with the top staffs of the game: producer Ryozo Tsujimoto, executive director & art director Kaname Fujioka, and director Yuya Tokuda.

While we have heard that you will be able to do a free hunt on the same field after clearing a quest, we learn in this interview that you can also head straight to free hunting before even taking any quests! The interview also shared some more tidbits, like how armors are no longer separated between Blademaster and Gunner, and that PS4 Pro (and assumedly Xbox One X) will have an option selection for emphasis between resolution, frame rate, or graphics. You can read more in the full translation below. 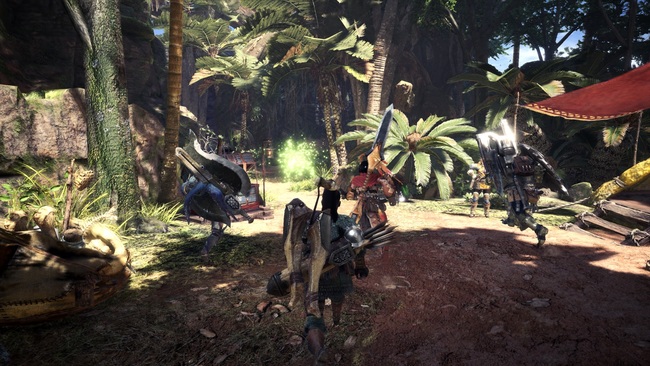 Gamer: What percentage of the game is done right now?

Tsujimoto: We’re mostly in the checking phase now. However, this time the system has changed very much, so there might be parts that we have to adjust.

Gamer: How did you come up with a method that’s so new like this?

Tsujimoto: This series has been continuing for 10 years, and we’ve challenged ourselves on various parts such as the action, ecosystems, and differences in height. Those factors are being extended even further with the newest technologies in current-gen home consoles, which results in a gameplay system like this.

Gamer: What’s the part you put a particular emphasis in?

Tsujimoto: It’s on how to express the unique world of Monster Hunter. By expressing the ‘lively monsters,’ which are important to Monster Hunter, we want [players] to jump further inside with the feeling of excitement as hunters. In order to do that, we have fields and movements be seamlessly connected to this game’s theme.

Fujioka: We do want players to make use of everything in the environment, including the ecologies and relations between monsters. In order to do that, it’s really important after all for us to make seamless environments. We probed into that and re-created it into the current shape.

Gamer: There is a Capture Net among the items, but how do you use that?

Tsujimoto: You can capture Environmental Creatures on the field, such as insects and animals with it. When you capture them you will obtain points, but we’re still going to release information on how those points will be used, and what will happen to the captured creatures. When you use the Capture Net with the Square button, the net will be set up. In that case, the controls for Slinger will change to controlling the Net.

Gamer: To capture large monsters, do you still have to use things like Tranquilizer Bombs? 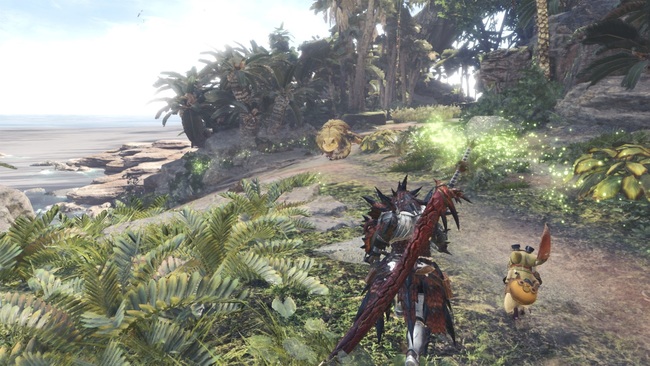 Gamer: When you’re walking around the field, we met a small animal that looks a bit different from Felyne (Airou in Japanese); what is that?

Fujioka: [Its Japanese name] is Tetrou, a race of beast-men in this continent which is different from Airou/Felyne. We will announce more details on it in the future.

Gamer: The sky in evening looks so beautiful, and the meals also look very tasty; we felt like you’ve also put a lot of power to the graphics as well.

Fujioka: We think it’s important to have even a moment be long-lasting in [people’s] minds. Just by casually looking at the beautiful evening [scenery], it can leave [impressions] on your mind, making you feel empathy. We’re making it so that you can experience many things.

As far as I see, I think there are not many games that have a fixation on things as detailed as meals. Because Monster Hunter is a game where you frequently eat meals (laughs), we together with the designers did our best in making extraordinarily delicious [meals].

Gamer: We heard that time will progress in-game, so if it becomes nighttime, will there be some changes to the monsters?

Tokuda: It doesn’t mean there are overtly major changes, but some monsters will take more sleep time for example. And [Flash] Flies that replace Flash Bombs normally would only exist indoors, but at nighttime, they can also go outside. We’re including such gimmicks like more usable traps being added at nighttime.

Gamer: Are there quests that start from nighttime?

Tokuda: Time will progress in-game, so if you go out on quests at nighttime, then it will stay [at night]. 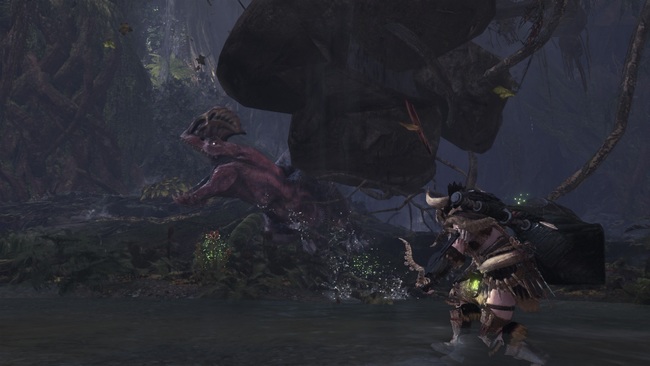 Gamer: How many types of maps will there be?

Tsujimoto: There will be a variety of them! (laughs)

Fujioka: We’re preparing a method of showing variations that make them feel like Monster Hunter, so please look forward to them.

Tsujimoto: Even in the same field, movements and usable items on the field will change based on the monsters that appear, so I think you can enjoy that thing too.

Gamer: When we walked around the field and entered a monster’s turf, we got chased away [by that monster], but will they stop chasing us after we get out of their turf?

Fujioka: There are some large monsters that if enraged will chase you to everywhere, but otherwise, those who just loiter around in a certain range won’t chase you any further.

Tokuda: Among them, there are also monsters that will attack you for laying waste on their turf despite you not attacking the monsters themselves. You can run away from the monster, or you can also hide in thickets. Timid monsters will run away if you beat a number of them, so we’ve prepared methods to deal with them without having to annihilate all of them. 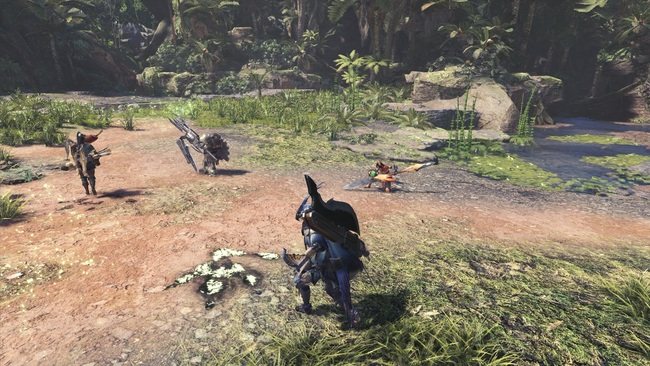 Gamer: We tried out many kinds of weapons, and we got an impression that the movements are getting more aggressive in general. Is that because of the fields becoming seamless and the maps becoming larger?

Tokuda: Both hunters and monsters are becoming seamless, so we had a concept to create to our best so that the movements won’t stop. While having the aforementioned as an axis, we’re also adding actions that make more use of the weapon characteristics.

Gamer: There are also systems like Automatic Item Combine, but are there any changes added to combining?

Tokuda: There are some that have their recipes changed.

Fujioka: We’ve made it so that this time you can create Potions with just Herbs. By doing things like making highly-consumed things can be compounded with just one item, we did a major review on Combining as well to reduce stress.

Gamer: Armors are now shared for both Blademaster and Gunner, so do you no longer have to use exclusive armors for each job?

Gamer: There are damage values being shown when attacking, and the Guide also thoroughly follows up on you. So it becomes much easier to play the game.

Fujioka: Monster Hunter is created while keeping the strategy of actions important. In order to make more people enjoy that, we really kept in mind to not make them stumble at the first movements when designing this. For the damage values too, I think there is a huge meaning by just being able to see how effective you are in aiming for [monsters’] body parts. We have the Guide overlook all of those.

Tsujimoto: We’re giving a choice so that not only newcomers but also people who have played past series won’t feel out of place. I think damage values don’t feel really out of place when you’re actually playing the game. 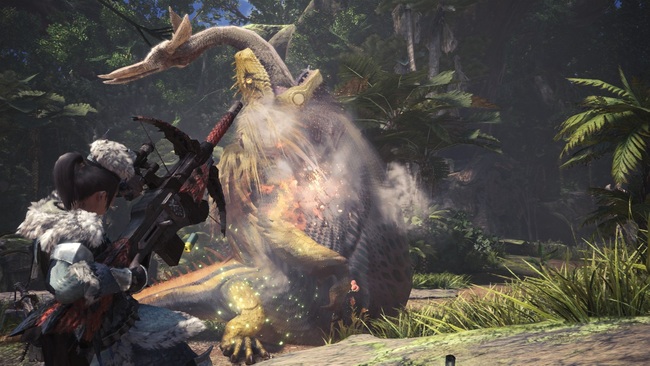 Gamer: Are there quests where you can explore fields without a time limit?

Fujioka: You’re exactly in that situation before you take a quest. You can also forage items [there].

Gamer: How is the method to upgrade weapons and equipment?

Tokuda: The basic layout of obtaining materials and [using them to] upgrade does not change.

Fujioka: We’ve worked on it so that it becomes more graphical and easier to look at than before.

Gamer: Are you doing some tunings for PS4 Pro?

Gamer: How the ratio between new and returning monsters will be like?

Fujioka: It’s difficult for us to say the tangible numbers or ratios, but since this time we’re also reviewing the environments on each field, we’re going to put many more monsters that have specializations on those environments. So we’re preparing new monsters there. Of course, popular monsters like Rathalos will also appear properly, but we’re creating them so that they can be enjoyed differently from before.

Gamer: There are monsters of various [sizes] from small to large, and there’s an even bigger monster… Could it be…?

Fujioka: It may be there, or it may not (laughs).

Tokuda: For that one, we’re creating it so that it can be satisfying! 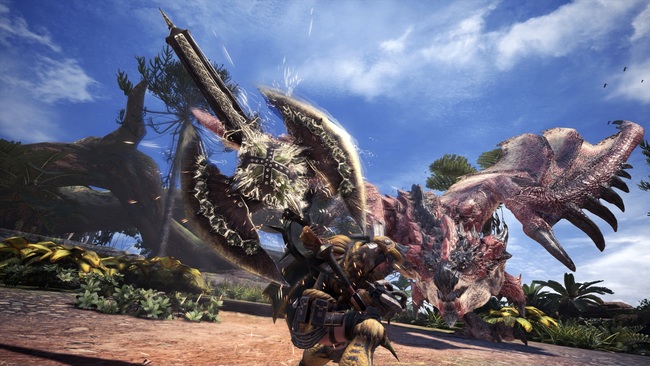 Gamer: When it was in handheld consoles, we think there were relatively many people who would bring it out and play together offline. But will online become the mainstream in this game?

Tsujimoto: Since this is on home consoles, we do think we want to make good use of the online environment and have people play it there. You can do single player while being connected to the internet, and you can also switch to multiplayer in the middle. This time there is no separation between Village and Guild quests, so you can choose on when to play ‘alone’ or ‘with everyone’.

Fujioka: When you’re progressing through the story, if you get a bit stuck, you can launch an SOS signal right there, and have other players help you out.

Gamer: How will it be displayed to people who are receiving the SOS signal?

Tokuda: When you access the Quest Board, quests with SOS signals will be listed there, so you can choose from there. You can also place filters on it.

Gamer: When other players join when the monster’s health is low, and [the quest] ends soon after, will the rewards still be distributed evenly?

Fujioka: Please wait for future information batches. However, we are working on a balance so that it wouldn’t cause a weird gameplay.

Gamer: Finally, please leave a message to people who are looking forward to this.

Tsujimoto: This had its first playable [demo] at Gamescom, but we’ll also make big announcements of information at Tokyo Game Show 2017, so please kindly anticipate that too. Also, we would like to create opportunities so that those living outside Tokyo can play it too.

Fujioka: Other than obviously hunting monsters, I think you can also enjoy just getting immersed into the environment. We want to prepare an environment in Tokyo Game Show where you can play with lots of information, so please kindly look forward to it.

Tokuda: I think there may be some changes you’re wondering about, but I think you’ll have fun when you get to play it, so please try playing it when you get a chance to. 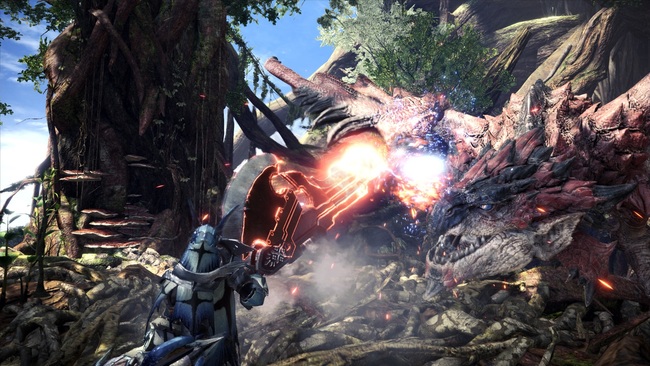 Monster Hunter: World will be released worldwide in early 2018. It will be exclusive for PlayStation 4 in Japan, but the West will be also able to play it on Xbox One and Steam. You can also read the details of the recently revealed Wildspire Waste here.