Champions and Challengers: Adventure Time is now available for smartphones

Good news to fans of both RPGs and the hit cartoon series Adventure Time: the tactical RPG based on the show, Champions and Challengers: Adventure Time, is now live on both Google Play and the Apple Store. A peek into its gameplay which has adorably adapted the show's animation and art style can be seen in the launch trailer below.

Players will control strategic battles against the Dice Lord who kidnapped their favorite heroes and baddies, who can also be ranked up to unlock cool new abilities. The combat follows a turn-based RPG style while battles occur in real time as you command your team. It's up to you to build the perfect team to take on the Dice Lord’s deadly and dangerous challenges. Each of your team's members has a set of powerful attacks where you can combine character abilities to smash through enemies.

Here are some more features to be expected in the game:

“Adventure Time fans will have a great time engaging in epic, turn-based RPG battles as they take on the Dice Lord to save Finn and his friends,” said Sridhar Muppidi, CEO of YesGnome, the game's developer and publisher. “We’ve enjoyed working with our partners at Cartoon Network to infuse Champions and Challengers gameplay with Adventure Time’s signature charm and humor, as it’s a great fit and offers tons of fun.” 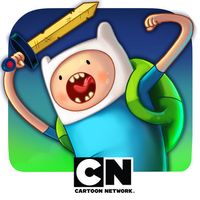