Bandai Namco has released new screenshots and artwork for Sword Art Online: Fatal Bullet, introducing new characters that will appear in the game as well as some gameplay details. A new main visual was also posted, which you can find in the gallery.

Yuuki, from the Alfheim Online arc of the anime, makes an appearance as a swordswoman in Fatal Bullet. She wields a style similar to Kirito, using a photon sword and pistol. Strea, who is an original character from several other Sword Art Online games, also makes an appearance. She uses heavy weapons like grenade launchers and gatling guns.

Two characters from the Gun Gale Online Alternative storyline will also be available as a free download sometime after launch. LLen uses a small child avatar and wears pink outfits, which actually can work as camouflage under the red sun in GGO. She has extraordinary agility. Pitohui is a talented player who became both a friend and mentor to Llen in GGO. 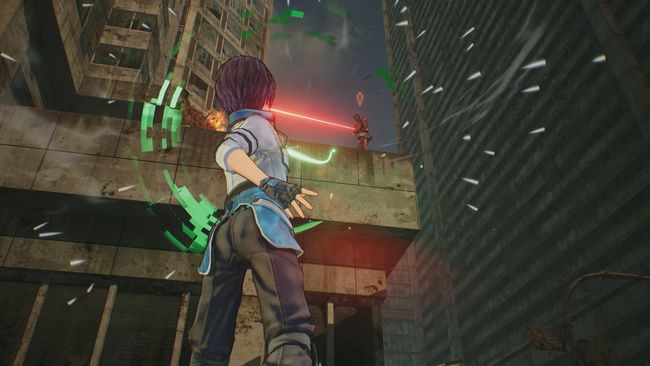 New to Fatal Bullet is the Ultimate Fiber Gun, or UFG, which is a special gun given uniquely to the main playable character. This is a sort of grappling hook/zipline gun that allows players to quickly maneuver the battlefield at great heights and distances, and how you decide to use the UFG will be a significant factor in the game.

Additionally, special enemies known as 'Bounty players' can appear, who are much more dangerous than regular enemy players. If you can manage defeat them, you can gain extra rewards. (Note that Fatal Bullet is a co-op game masquerading as a MMO, 'enemy players' are just NPCs). The player can form a party of up to 4 characters to assist in taking down bounties, and the player can perform commands to the party, such as having them concentrate fire or to standby.

Find screenshots and character art in the gallery, as well as some fenservicey event CGs. Sword Art Online: Fatal Bullet will be available Early 2018, for PlayStation 4, Xbox One and PC. You can find more story details and gameplay footage here.