A batch of new information regarding Yakuza Kiwami 2's mini-games have been released. While some of these games are returning features to the Yakuza series, there are more than a handful of new additions to increase the number of activities for players to enjoy. 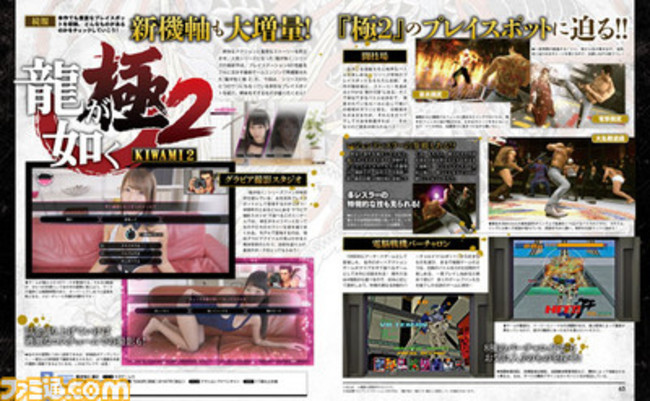 Two of the new mini-games added to Yakuza Kiwami 2 comes in the form of a "toylet" game. "The Northern Wind, The Sun and Me," and "Battle! Milk From Nose" were shown on previous livestreams for Yakuza Kiwami 2. These mini-games can be accessed in the bathrooms of the SEGA arcades located in Kamurocho and Sotenbori.

Gravure Shoot also joins the line-up. Similar to "Battle! Milk From Nose," this game was also shown during the TGS 2017 stream for Yakuza Kiwami 2. Gravure Shoot allows for Kiryu to take the role of a gravure idol photographer, instructing the idols how to pose to receive the best possible outcome. You will be able to select various costumes for the two idols to wear during photoshoots through progression.

1995 arcade game Cyber Troopers Virtual-On is a new addition to the selection of the SEGA arcade. Virtual-On is similar to "versus" style fighting games. Two virtuaroids will face off on a stage using a variety of firearms, explosives, melee weapons, and other techniques to destroy the enemy for a set number of rounds, usually a single battle, or best two out of three rounds.

Returning mini-games include golfing, the batting cages, mahjong, shogi, blackjack, poker, and karaoke. However, Majima is now available as a companion while singing karaoke. It appears that the new song Majima can sing will be some kind of passionate ballad in remembrance of the events in Yakuza 0, however this song can only be sung as Majima. Haruka also returns as a karaoke partner for Kiryu.

Additionally changes have been made to Yakuza Kiwami 2's underground battle arena located in Shangri-La. Modifications have been made to the arena itself, such as the addition of an electrified fence to keep players on their toes. Large scale battles can also take place within the arena, allowing for players to face off against more than a handful of opponents at once.

You can find more of our coverage on Yakuza Kiwami 2 here.

Yakuza Kiwami 2 will be released exclusively for the PlayStation 4 in Japan on December 7, 2017. There has been no word of a North American or European localization.

Yakuza Kiwami 2's official announcement and what to expect from it