Square Enix has announced World of Final Fantasy: Meli-Melo for iOS and Android mobile devices, set to release in Japan by the end of the year. Hiroki Chiba returns as the director, and the game is being developed in partnership with Drecom (Everybody's Golf). The game is free-to-play with in-app purchases.

The game features an entirely new story set in the world of Valgaran, and is told in the format of a manga. The battle system will also be modified in a way that up to six characters can be stacked on top of each other, and there will be cooperative elements introduced through online functionality. Expect cameos from Final Fantasy characters throughout the series, just as in World of Final Fantasy.

Battles take place largely automatically, but the player first must raise their Mirages with the gems gained while exploring, and players must learn how to stack Mirages in order to achieve special abilities. These special abilities include ultimate techniques as well as summoning cameo heroes from the Final Fantasy franchise.

Find screenshots and art in the gallery. 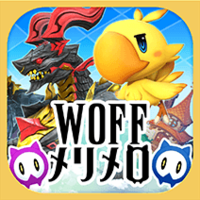