It's been quite some time since the indie Rainbow Skies was announced 4 years ago, but it still exists and has been finally announced for release in 2018 on the Playstation 3, Playstation 4, and Playstation Vita.

Rainbow Skies is a fantasy RPG from the makers of Rainbow Moon, with the story centering around Damion, an aspiring monster tamer. In his final examination, he messes things up from a terrible hangover, setting off an interesting set of events with his examiner Layne.

The gameplay is turn-based, and you can explore between two parallel worlds while hunting and breeding monsters to become your party members. The game promises 100 hours of content, which includes side quests and optional content.

Pre-orders for its physical edition are now available on Play Asia, which is only available for the PS4 and Vita.The physical editions will have standard and limited editions, with the latter containing the following:

A physical edition will also be released for Rainbow Moon due for 2018. You can pre-order it in Play Asia , with the limited edition having the same type of contents as Rainbow Skies.

Gust publishes a teaser trailer for their new project in 2019 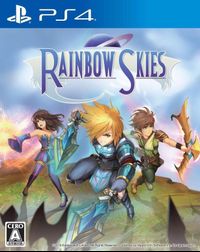