Square Enix has announced that both the Windows Edition and Royal Edition of Final Fantasy XV will release worldwide on March 6. Both will be priced at $49.99.

The Royal Edition, previously leaked by the ESRB, is a sort of complete edition for PlayStation 4 and Xbox One, including the base game and over 20 DLC items including all season pass content. Additionally, both editions will also feature an expanded map of the Insomnia City ruins as well as new enemies, side quests, and a first-person camera mode. The Windows Edition or Final Fantasy XV - coming to Steam, Origin, and Windows 10 - will support 4K resolutions and include special Nvidia Gameworks integration.

For those who already own Final Fantasy XV, a new downloadable content "FINAL FANTASY XV Royal Pack" will be available for $19.99, which includes the new updates such as the expanded City Ruins and new quests not already available for download. Those who pre-order the PC version can get a small bonus depending on the storefront starting on February 1.

UPDATE: Square Enix has contacted us to inform that the "FINAL FANTASY XV Royal Pack" was erroneously as $19.99 when the actual pricing still remains undetermined. The updated press release can be found in the quote below.

Find the trailers, fact sheet, boxarts, PC spec requirements, and screenshots for both editions below.

*Note that the physical version disc is an installer only. Internet connection as well as STEAM account registration is required in order to play the game. Any internet access fee or connection fee must be covered by the customer.

**Note that the physical STEAM version will not come with the preorder bonus. The early purchase bonus will be included. 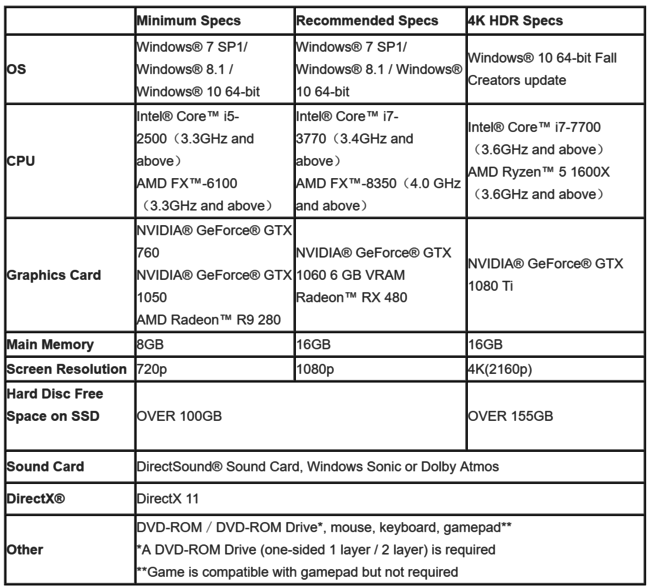