Metal Max Xeno to be released in North America and Europe

Kadokawa Games has announced that post-apocalyptic RPG Metal Max Xeno is set to release in North America and Europe. While the western publisher hasn't been formally announced, NIS America seems like a good bet, as they have localized other Kadokawa games such as Demon Gaze and God Wars: Future Past.

Metal Max Xeno will be the first game in its series to get a localization since 2006's Metal Saga for PlayStation 2 (localized by Atlus USA). In fact, Metal Saga was the only game to receive a localization prior.

Check out a recent Japanese trailer to see an introduction to the game's cast as well as some gameplay footage.

Metal Max Xeno is set to release on April 19 in Japan for PlayStation 4 and PlayStation Vita. You can find the debut trailer here. Find more screenshots and character artwork in the gallery below. 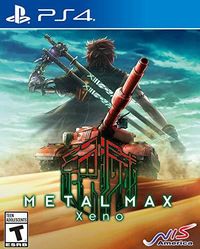