In addition to providing more New Gundam Breaker details on new characters and gameplay systems, the latest Weekly Famitsu magazine also has an interview with producer Kotaro Usui from Bandai Namco and director Daisuke Fukugawa from Crafts & Meister, the developer of this game after working on the first three Gundam Breaker games as well.

This interview mainly covered the major changes made to the battle gameplay and customization system, but it also asked the million dollar question on why they didn't name this game Gundam Breaker 4. We translated the interview which you can read right after the jump.

Famitsu: When did the development of this game begin?

Usui: From the beginning of 2017. The first Gundam Breaker was released in 2013 so this year marks the series' 5th year, so it has a high pace that 4 games are released within a span of 5 years (laughs).

Usui: Actually, Gundam Breaker is also popular in Asia, and it’s even the best selling Gundam game in Asia compared to the past. Furthermore, this time we’re also planning to sell the game worldwide by including Europe and America. So, first of all, there’s the New in that meaning.

Fukugawa: Also in this game, the gameplay style has been changed considerably. When discussing Gundam Breaker, a key component is that of “Cooperation”; in prior games, single-player was the main focus, and friends would jump in afterward. In this game, the “Cooperation” point is still there unchanged, but it’s now possible to have 3-on-3 team battles. Of course, you can also play it solo, but by having up to 6 people participate, we’ve made the battles to be more heated.

Usui: When we speak about battles and versus, you may be thinking of other Gundam games, but we’re drawing a distinction between them. If I had to say it in a very simple way, it’s like a sports event. You get provided with a theme, do missions based on that theme, and add points to your team. You will be competing by using those amounts of points.

Famitsu: What kind of missions are you preparing there?

Usui: There are also simple missions like “Defeat the opponent’s team.” In some other missions, while you can also fight the opponent's team, instead of outright destroying them, it might be more along the lines of 'disrupting' them. You can complete missions by not assaulting the opposing team and be evading their forces instead.

Fukugawa: The missions will come one after another, so you can make a strategic decision on whether to have each member do separate missions or all 3 members focus on the same mission.

Famitsu: In that case, is this game going to have a bigger importance on online play?

Fukugawa: That’s not the case. The single-player Story Mode also has a number of characters and quotes with a volume even bigger than before. The world settings in the past used to be Universal Century-like (GB2) or in a Shopping Arcade (GB3), but this time it will have a School theme. In comparison to GB2’s serious story, GB3 went on a softer route; and this game will also have the same style [as the latter].

Usui: It’s a popular anime, and the world settings seem close too.

Famitsu: What kind of requests did you get from Gundam Breaker 3 users?

Fukugawa: While of course there were requests to add even more mechs, there were also a lot of voices asking to add more breadth to customization. This time the system will tie an EX Skill to each part, so I think the weight of each individual part will change with that.

Usui: The breadth of customization and gameplay has increased with the “Real-Time Customization Battle” that lets you equip obtained parts during battles. It’s not just about the customization itself; for example, if there is a strong enemy in the opposing team, you can attack him to drop his parts, and if you equip those you can instead use the EX Skills tied to them. Which means you will be able to weaken the enemy and strengthen yourself at the same time. It’s also the same case if there’s a strong enemy in the neutral force not aligned to your team or opposing team; if you can obtain its parts faster than your opponent, you’ll be in an advantage.

Famitsu: Does a Gunpla which had its parts stolen be no longer able to fight?

Fukugawa: Actually, this game no longer has the feature that automatically pulls removed parts. In exchange for that, we have a new Inner Frame part in addition to all the other parts: Head, Body, Arms, Legs, Backpack, Shield, Melee Weapon, and Ranged Weapon. It’s like a skeletal part inside the mech, and thanks to this you won’t be in a situation where losing legs make you unable to move or losing arms make you unable to use weapons. Since it’s a team battle, having even a player become incapacitated would be troublesome, so it can also be a used as a relief.

Usui: You can stock obtained parts, but you can also share them by dropping so that a partner can take them.

Fukugawa: I think in the previous game people ended up stacking too many parts that they never actually used. Some people had trouble managing things because they had a multitude of the same part, and some others couldn’t even understand what kind of parts they had. We’re making this game so that you can take care of your obtained parts in the Customization Part while enjoying encounters with parts you have never seen before during battles. So you can enjoy not only creating your own Gunpla but also doing minor changes to it and see its new form. You can experience the changes not only in the post-battle Customization Part but even during battles as well.

Usui: When sortieing with your own customized Gunpla, it may end up returning as a wholly different Gunpla (laughs).

Famitsu: Are there any features from the previous game that you have brought to this game?

Usui: While the shape has changed, the Builders’ Parts that let you decorate Gunpla received very good reception, so they will also appear in this game.

Famitsu: As far as what we have talked so far, what about the appearances for SD Gundams…?

Usui: While they were popular… this time we had no margin to put them in. I am also in the direct generation [of SD Gundam fans] so I’d like to put them in somewhere though…

Fukugawa: While I can’t say this to be the replacement, despite having a new system, any previously playable mechs will not be removed here. Mechs that appeared in the previous game plus more new mechs are planned. However, if you were able to obtain all mechs at once it would be hectic to manage the parts, so we’re still thinking about how to make each mech appear.

Famitsu: Do you have any plans to release additional DLC?

Usui: While we do consider it, at least we’re not going to do such a thing like providing only mechs as paid DLC. Speaking of Gundam Breaker, there is an item called Luck Booster that makes it easier for you to obtain a lot of parts at once. We’re still currently thinking a lot about which way to provide this. 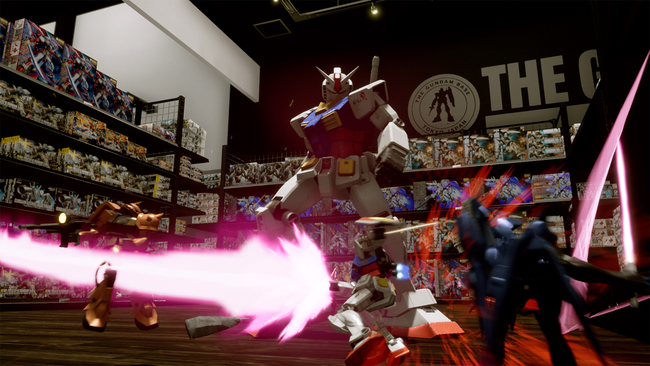 New Gundam Breaker is currently under development using Unreal Engine 4 and will be released on PlayStation 4 worldwide in 2018. You can also read the latest information on the game right here.

New Gundam Breaker update patch to version 1.02 is out now