Final Fantasy XV: Windows Edition will have a playable demo next week, new goodies for Steam and Origin pre-orders

Square Enix announced via their blog a few more details about the upcoming Final Fantasy XV: Windows Edition. The key announcement is that the game will have a playable demo available next Monday, February 26 containing all of Chapter 1. The demo will be available on all three storefronts with the game: Steam, Origin, and Windows Store.

Also announced today is a peculiar bonus for any Steam purchases made before May 1st: a free Half-Life focused outfit containing a HEV Suit, Scientist Glasses, and a Crowbar weapon. These items are also available to be used for the game's multiplayer expansion Comrades. It's a little bit unexpected but it's not the first time we've seen this sort of crossover for the series, let alone for Final Fantasy XV. 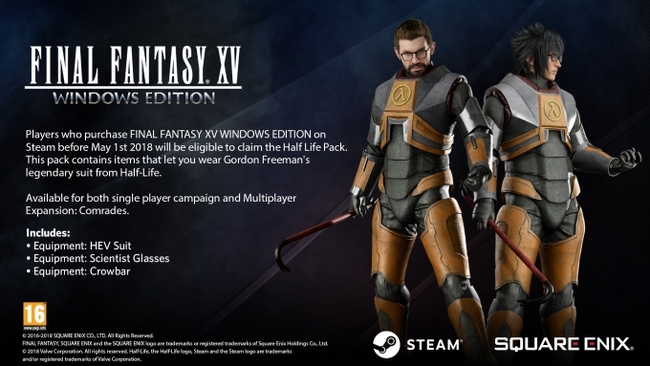 Players planning to purchase from one of the other storefronts will also have some new bonuses to look forward to. Purchasers of the Windows Store version will not only be able to use their Xbox One save data, but can expect a post-launch update to allow for console crossplay in the Comrades expansion. The blog also states that the Origin version of the game will have additional bonuses to the ones already announced, but haven't shared any details on those yet.

Update: Square Enix and Electronic Arts have provided the details for any Origin pre-orders of Final Fantasy XV Windows Edition. In addition to the decals for the Regalia, players will earn The Sims 4 costumes to use in game: including the Llama Suit and Plumbob (the green prism) item.

Final Fantasy XV: Windows Edition comes out on March 6. We have a review of the game's console release here.