PoPoLoCrois: Narcia's Tears and the Fairy's Flute out May 8 in Japan

Sega and developer Epics have announced that PoPoLoCrois: Narcia's Tears and the Fairy's Flute, the latest entry in the long-running RPG series PoPoLoCrois, will be launching on iOS through the App Store and Android via Google Play on May 8.

The first involves the protagonists Pietro, the prince of PoPoLoCrois Kingdom, and Narcia, the forest witch/sprite. After being entrusted by the Fairy Queen Midea to protect Reuben Forest, they set off on a long adventure where friendships and peril awaits.

Another story begins in the holy ground of Morgue on the continent of Necrosia, located to southeast of the kingdom. Zamad, a self-proclaimed apostle of God, has appeared in Bilca Village. His destiny along with the fate of the world will soon come into play.

Finally, the third story is made up of episodes focusing on each individual hero. At the port city of Pacella in the kingdom, a naval fleet tournament is being held by the Braves, or heroes of the world, in honor of the sea goddess Varnas.

Check out a teaser trailer for the latest entry in the series below:

Those interested in trying out the game early can pre-register right now through the official website. The developer is promising better in-game bonuses depending on the number of pre-registrants. There has been no word on an English localization. 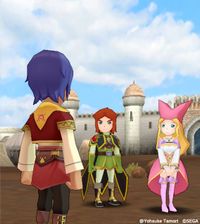