The other day, developers The Gentlebros Games announced that their critically and commercialy successful action RPG from 2017 will be received a sequel called Cat Quest II: The Lupus Empire. 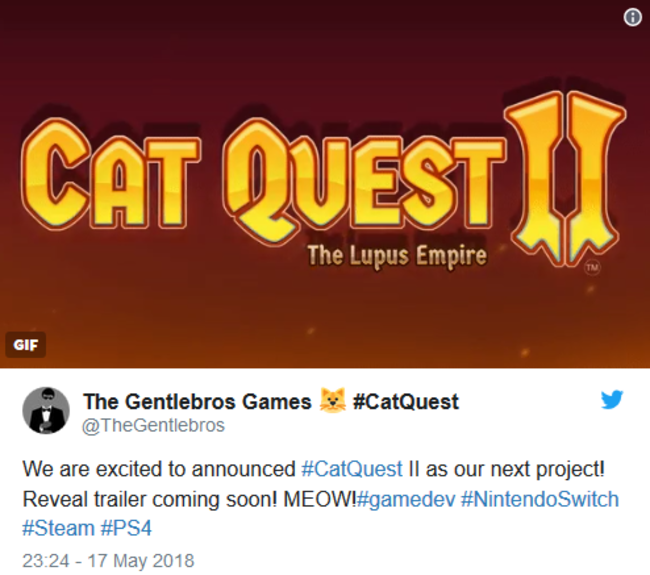 While all we have to go with at this time is the announcement tweet, we do know the game will be released on the PlayStation 4, Nintendo Switch, and mobile devices (iOS and Android) and we can expect the reveal trailer soon.

The Steam page for Cat Quest decribes it as "an open-world action RPG with a pick-up-and-play gameplay style along with plenty of cat puns for players to indulge in. Leap into a grand adventure in purrsuit of the evil Drakoth and your catnapped sister! Explore Felingard's huge overworld map, risk life and limb delving into dungeons for epic loot, and lend a paw to a furry cast of characters in a flurry of side quests."

While we wait for the official video for the sequel to be shared (and will update this article accordingly), you can check out the launch trailer for the original Cat Quest below to get an idea of what to expect:

Cat Quest II: The Lupus Empire set to release in 2019

Cat Quest II: The Lupus Empire to release for PlayStation 4, Xbox One, and Nintendo Switch on October 24