Sega has released a new English trailer for Valkyria Chronicles 4 introducing the main cast of the game for the first time with English voices, alongside a special edition available in the west.

The "Memoirs from Battle" Premium Edition is available on Amazon for $99.99 on PlayStation 4, Xbox One, and Nintendo Switch. It includes an exclusive artbook themed as Claude's travel journal from the game and a replica of the game's primary tank unit, the Hafen. This premium edition also comes with a pair of DLC packs featuring Squad 7 from the original Valkyria Chronicles - "A United Front with Squad 7" and "Edy's Advance Ops".

These DLC offerings will also be available as an add-on purchase for all platforms around the game's launch this Fall. Check out the rundown below. 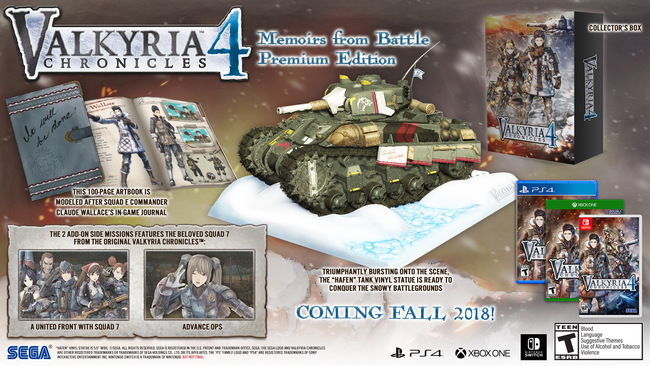 Exclusive to the Valkyria Chronicles 4 "Memoirs from Battle Edition"*:

Valkyria Chronicles 4 releases this Fall for PlayStation 4, Xbox One, and Nintendo Switch. You can find the announcement information here.