NAIRI: Tower of Shirin gets a playable demo

Developer HomeBearStudio and publisher Another Indie have shared a playable demo for their upcoming point-and-click adventure game NAIRI: Tower of Shirin. To try it out for yourself, be sure to visit the Another Indie Discord channel for a Steam key.

Here's a quick rundown of the game for those unfamiliar with it via Another Indie:

Nairi's storyline is about a young woman from the rich district of Shirin, the oasis city where the game takes place. A sudden incident forces her to abandon her rich, sheltered life, and she ends up in the seedy lower district of the city ruled by ruthless gangs. One of Nairi’s prime objectives is to find her way home after she escapes the clutches of her captors but this will be fraught with many smaller objectives and tasks and of course bigger dangers.

Exploring a dungeon to seek out objects that will be invaluable along the journey, finding a smuggler to impart much need information, aiding another character who would need your help, etc. are all part of the bigger plan which has been seamlessly and intuitively crafted by the development team.

NAIRI: Tower of Shirin encompasses five distinct richly detailed and atmospheric areas, ranging from dusty desert hideouts, to a bazaar, mysterious dungeons and some vast open expanses. An in-game cast opens up the game but no violent confrontation or combat exists, gameplay-wise. Antagonists are interacted with through dialogue and no choice exists that have serious consequences; they serve to add flair, comedy or drama to the dialogues.

The interface is simple, yet intuitive; click on whatever catches your eye from the clean and uncluttered screen and the relevant commands will provide all your alternatives. Ingeniously, Rex's Journal provides visual hints to the player when they are stuck or lose track of their objective. Difficulty is by dictated the way the player performs, with the levels offering visual clues to aid progression and the gameplay area grows larger as you advance.

Check out a teaser trailer for the Nintendo Switch release below:

Here also is a batch of screenshots:

While a release date for NAIRI: Tower of Shirin has not been shared, the Steam page notes that it will be out "quite soon."

NAIRI: Tower of Shirin launches for Switch and PC via Steam on November 29

Tower of Time is a new promising-looking tactical RPG, and it's leaving Steam Early Access soon 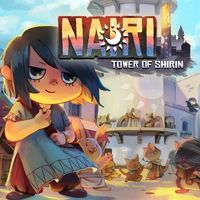