Earlier this week, FuRyu revealed their newest game titled Crystar in Japan and published its teaser trailer. FuRyu has now divulged more information about this action RPG game with a storyline written by Naoki Hisaya of Kanon fame, which you can read below.

In this game, the player will assume the role of Hatada Rei, who fights ghosts and revenants in the limbo as part of her contract with a devil to resurrect Hatada Mirai, Rei's sister whom she killed accidentally. Certain enemies will drop Thoughts of Death Agonies when defeated, and when Rei purifies these by crying, her mental will grow up and she will also obtain new equipment.

Rei can also summon Guardians which are embodiments of the ideals of characters in Crystar. This game will also allow the player to switch the active character between Rei and up to 3 other characters who move together in a 4-character party. In addition to the combo system and powerful finishers, the player can also opt for Guardians to automatically counter or guard against attacks, so that even people who are still new to action games can smoothly proceed through the game.

Crystar will also offer replay value in collecting enemy information and BGMs, the latter of which are being composed by Sakuzyo, a young composer who has been producing numerous songs in the rhythm games scene.

A girl named Rei and her little sister Mirai got lost in the afterworld called the Limbo.
The two aimed to return to their original positions when unfamiliar beings assaulted them.
An unusual power awakened within Rei, who fights to protect Mirai.
However, the power went out of control and she ended up killing Mirai by herself.

A devil whispered to Rei, who had fallen into despair.
"Reap souls of the dead who are drifting in the parallel world, and offer the tears flowing after doing all those hardships, and the dead Mirai will be able to be 'revived'..."

Rei, who made a contract with the devil for her sister's sake, stands up on a battle stage that will risk her life.

FuRyu's new action RPG Crystar is going to be released for PlayStation 4 in Japan on October 18. 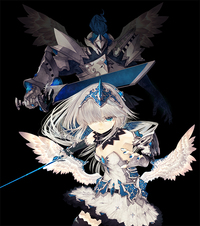