Since its release in May, the development team at Digital Sun has been listening to fan feedback regarding Moonlighter - the hybrid roguelike/shop simulator. Several patches have already been made to improve usability and squash various bugs & glitches, but today the publisher announced the future outline for significant content updates yet to come to the game.

Included in the roadmap are plans to incorporate a New Game + mode with a higher level of difficulty, companion characters that can help Will out in the dungeons, as well as some new bosses to vanquish. All of these updates will be free.

Digital Sun and publisher 11 Bit Studios also note that a Nintendo Switch version is still in the works, and will post more information when it's available.

Find the Infographic and detailed overview below: 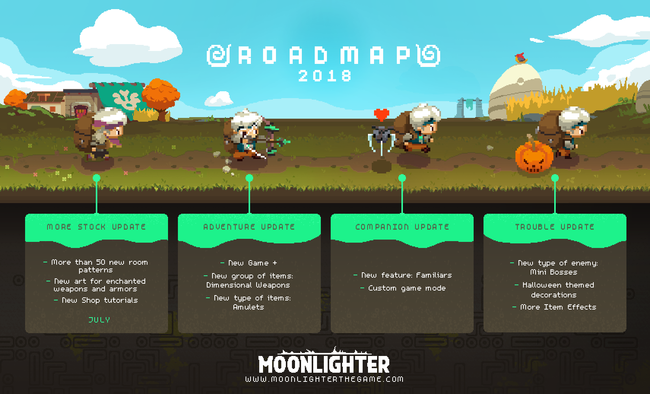 Excited? So are we! Let's give you a little bit more information about each milestone from the roadmap (not everything, though - we like to keep some secrets) and this should go without saying, but all the updates you see here are going to be totally free!

That's the basics, and as we said before, we don't want to spoil everything so we can keep you on the edge of your sats while you wait for upcoming content! And yes - we have even MORE updates planned for 2019!

Frostpunk
Children of Morta
This War of Mine
Warframe
Graywalkers: Purgatory