Kadokawa Games has formally revealed in Japan that they are currently working on God Wars 2. This is the full-fledged sequel to God Wars: Future Past, the strategy RPG based on Japanese mythology which has been released worldwide in June 2017. 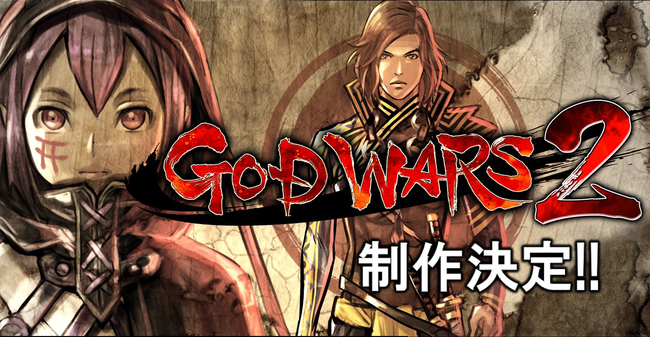 God Wars' director Yoshimi Yasuda mentioned in the press release that, if the first God Wars was based on the "Creation of the Country" part in the Japanese mythology and depicted the founding of the Yamatai country by the deities, God Wars 2 will be based on the "Handover of the Country" part and depict the "Demise of the mythology world" as this country moves from the deity world to the human world, as well as the founding of the Yamato country.

Two new characters for God Wars 2 are also introduced in this announcement. The brown-haired man is Takeminakata, the son of Ookuninushi who will be voiced by Sho Karino. And the purple-haired girl is Orochi, who is being voiced by Moa Tsukino and said to have inherited the spirit of the serpent Yamata-no-Orochi. You can see their character artworks right below.

Note that as of this writing, Kadokawa Games has not revealed the release timeframe or platforms for God Wars 2 yet.

As a record, the complete edition of the first God Wars game, God Wars: The Complete Legend, has been released for Nintendo Switch, PlayStation 4, and PlayStation Vita in Japan on June 14. Meanwhile, for the West, only the Nintendo Switch version is planned to be released by NIS America on August 31 in Europe and September 4 in North America. However, all of the additional content, including the new character Orihime, will be available as DLC for players who own the English PS4 and Vita versions of God Wars: Future Past.

Learn more about jobs in God Wars: Future Past