The Arcade Crew has announced a new RPG/beat-em-up hybrid Young Souls, developed by French indie studio 1P2P. The game does not have a release window or platforms at this time.

Young Souls is brawler featuring two teenage twins who live with their adoptive scientist father. An experiment seemingly goes awry when a portal to an alternate world opens, and the two set off to explore this realm - encountering new friends and foes. The game features both solo play and drop-in/drop-out co-op.

Find a debut trailer, fact sheet, and screenshot set below. You can check out the official website here.

Gorgeously animated, Young Souls draws you in with its distinct art direction but keeps you playing via a deeply narrative-driven RPG beat-em-up that features clever crossover mechanics. Young Souls features precise gameplay mechanics wrapped inside a profound story with unforgettable characters and intense combat. Penned by Matthew Ritter (The Walking Dead game, Nova Phase graphic novels), Young Souls draws players into a familiar place teeming with nostalgia and adventure where everything is possible.

Jenn and Tristan are two teenagers twins who find themselves suddenly abandoned and without a family until a good-hearted scientist adopts and brings them into his home settled within a small port town. Life in Portsbourgh for Jenn and Tristan proves uneventful. Uneventful, that is, until they uncover a portal to another world which threatens the very existence of life on Earth as we know it. The alternate world is filled with goblins, friends and foes, but Jenn and Tristan are used to going it alone and set out to navigate this strange new world - all was going well, until it wasn’t.

Young Souls features intelligently designed drop in/drop out mechanics, meticulously and gorgeously rendered environments to play in, set to a beautiful original soundtrack scored by Joachim Neuville (Inside My Radio). Players can train, collect gold and raid in dozens of dungeons with a variety of weapons, but will have to be careful that Jenn and Tristan don’t meet an early demise. 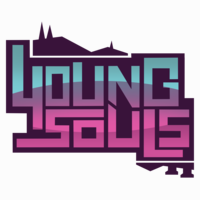