Blizzard Entertainment has announced Diablo III Eternal Collection will be heading to the Nintendo Switch sometime this fall. This will mark the first time the Diablo franchise has appeared on a Nintendo platform.

Eternal Collection contains the base game including the two expansion packs - Reaper of Souls and Rise of the Necromancer. Here's a full rundown provided by the company:

The minions of Hell have grown unfathomably strong since Diablo® III’s release, but lucky for the High Heavens, reinforcements are on the way. Later this year, Nintendo Switch players the world over will join the fray with the Diablo III Eternal Collection™ and wield their systems’ portable power to slay demons and amass vast hoards of loot anytime, anywhere.

The Eternal Collection is the definitive edition of the award-winning action RPG, including everything from the original Diablo III, the critically-acclaimed Reaper of Souls® expansion, and the Rise of the Necromancer® pack. With seven powerful character classes, a five-act campaign that spans the lore-rich and demon-infested world of Sanctuary, and an endlessly replayable Adventure Mode, the Eternal Collection is the perfect all-in-one package to introduce newcomers to a lifetime of adventure.

The Eternal Collection for the Nintendo Switch incorporates the system’s flexibility and versatility into its design. Whether using a Joy-Con™ controller or a Nintendo Switch Pro Controller, players will have an awe-inspiring assortment of demon-slaying powers at their fingertips, thanks to intuitive, ultra-responsive controls custom-built for Nintendo Switch. And true to the spirit of the Diablo series, players will also have a wealth of options when it comes to cleansing Sanctuary cooperatively—up to four players can band together to engage in grand multiplayer crusades, whether they’re sharing a screen on a single Nintendo Switch, linking their systems together wirelessly, or teaming up through the Nintendo Switch Online* service.

Diablo III will also be receiving various exclusive Nintendo-themed additions to the game such as a Ganondorf cosmetic armor set, a cucco pet, "Echoes of the Mask" cosmetic wings, and more. 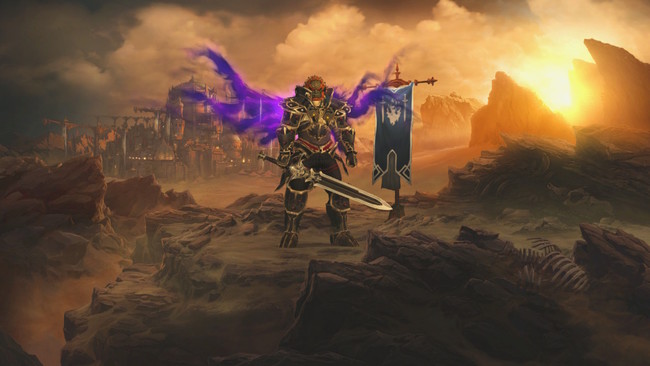 As part of the announcement, Nintendo's Reggie Fils Aime and Blizzard CEO Mike Morhaime sat down to discuss about the game coming to the Switch:

Finally, here is a massive collection of screenshots: