Chocobo’s Mystery Dungeon: Every Buddy coming to PlayStation 4 and Nintendo Switch this Winter

During today's Nintendo Direct presentation, Nintendo revealed that 2007's Wii rogue-like Final Fantasy Fables: Chocobo's Dungeon is being remastered for Nintendo Switch as Chocobo’s Mystery Dungeon: Every Buddy. Square Enix later announced that the remaster will also head to PlayStation 4. It is set to release this Winter.

Not much information was shared on the remaster, but Nintendo stated during the presentation that now all monsters can be befriended in the game and that a second player can join cooperatively in local multiplayer. We'll have to stay tuned for more information.

Here's an overview via Square Enix:

The rules to this mysterious dungeon are simple… every time you enter, the world around you changes shape, but it only moves whenever Chocobo moves, whether Chocobo walks, kicks, or uses an item.

Fight monsters alongside your buddies and adventure through countless dungeons, all whilst enjoying a deep and engaging story, it even includes 2-player co-op play! 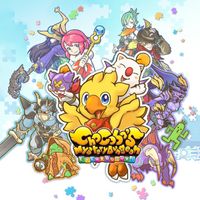