Publisher Ubisoft and developer Behaviour Interactive (Fallout Shelter, Dead By Daylight) have revealed a brand new mobile game set in the Assassin's Creed universe, and it's called Assassin's Creed Rebellion. The strategy RPG will be released for iOS and Android devices on November 21, and those who want to try out the game early can pre-register right now.

Here is a full description of the game via Ubisoft:

Join Ezio, Aguilar, Shao Jun, and many different Assassins simultaneously for the first time ever!

Developed exclusively for mobile, a new version of the Animus allows us to experience memories from the past and play with different Assassins simultaneously. Gather powerful Assassins in a single Brotherhood and unite against the Templars and the oppression raging in Spain.

Build Your Own Brotherhood

Finally, check out the announcement trailer for the game below: 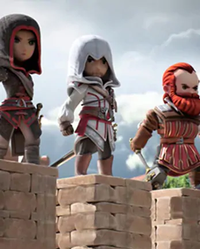