During The Game Awards 2018, we finally got our first look at the future of Dragon Age, as teased since last week, though it was very brief. We here some dialogue echoing the last DLC of Dragon Age: Inquisition - Trespasser, as well as images suggesting the expected direct continuation from the previous game's cliffhanger ending.

Bioware also posted a short message on their website:

We have been working on a new Dragon Age™ game for quite a while now and I am pleased to finally tease the existence of this project!

While we won’t be sharing any details for now, I can tell you we have been building a new team around a core of Dragon Age veterans, people I’ve worked with on Dragon Age, Jade Empire™, and some of whom I’ve worked with since the Baldur’s Gate days.

While I have been focused on Anthem™, the rest of the team has been hard at work exploring ways to push BioWare’s storytelling to the next level.

I’m so excited to show you more!

So while details are light, we expect to hear more as we go into 2019. 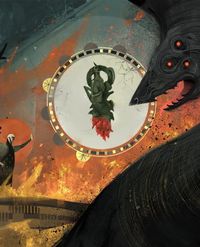