Our quest to update the Media Vault fully continues, and we level up from Final Fantasy spin-offs for the Nintendo DS to all-new properties that are downloadable - Double Fine's new Action-RPG for Xbox Live Arcade, Costume Quest.

Costume Quest features a charming world inhabited by kids wearing costumes, as the name suggests, but when the kids enter battle they transform into the powerful beings they're dressed as for real. Check out the trailer, and the first batch of screenshots, below.

It's out on Xbox Live Arcade on October 20th, and we'll have a full review close to release. 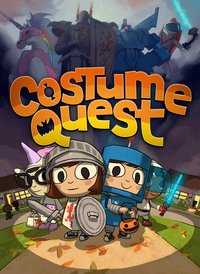