In addition to the common warship-based squadron formation, Cross Rays will have a new alternate group type that does not require a warship. You can read more information on that right below. 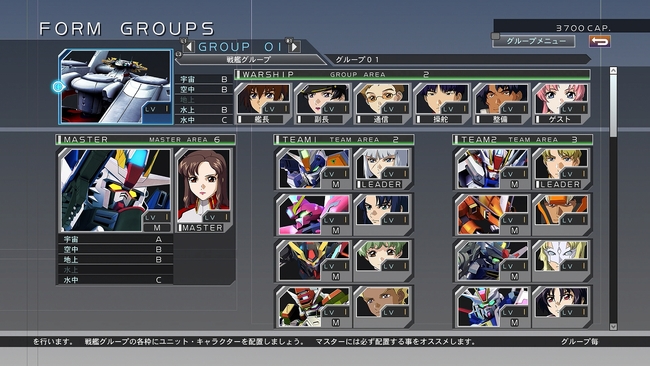 The typical squadron composition, as commonly used in many prior G Generation games, is formed with a warship that can dock up to 5 or 9 units - a Master Unit and a team or two that can host 4 units each depending on the warship's capacity.

Characters can be placed on any pilot or crew slots, it is even possible to have odd assignments such as having Kira Yamato be the captain of Archangel and Murrue Ramius piloting the Freedom Gundam, as seen in the above screenshot.

Most units in this group do not automatically recover their HP and energy and have to return to the warship in order to repair and rearm. Only the Master Unit is exempt from this rule as it has automatic HP & EN regen at each turn. The Warship can also call out a Group Attack where squadron units within its range will launch a simultaneous attack against multiple enemy units. 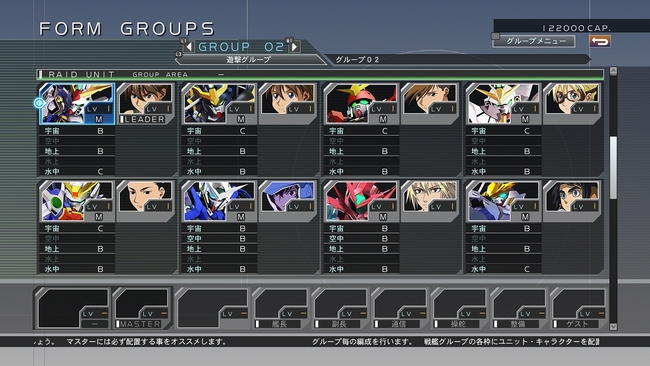 This type of squadron composition is brand-new in the entire G Generation series, and it lets players form an independent squad of up to 8 units that can move on their own without having to rely on a warship. This group has an exclusive "Move All" command where players can have all squadron members move simultaneously without having to give separate movement orders one by one.

Units in a Raid Group also have automatic HP & EN regen per turn, similar to the Master Unit in a Warship Group, but with a twist. The more wingmen stay adjacent to a unit, the more HP it will recover. But the fewer wingmen stay adjacent, it will instead recover more EN.

Also, while Group Attacks in a Warship Group can only be initiated by the warship, a Group Attack in a Raid Group can be called off by any member of the squadron.

SD Gundam G Generation Cross Rays will be released for PlayStation 4, Nintendo Switch, and PC via Steam in Japan and Asia in 2019. An English localization of this game will also be available in Southeast Asia.