Following the announcement of an Open Beta and English language support, Aiming Inc has announced that 'free-to-play anime-inspired MMORPG' Caravan Stories will release for PlayStation 4 in North America this July.

Find the annoucnement trailer, press release, and screenshot set below.

Enter the vast, open world of Iyarr, where adventure awaits around every corner. Players can choose their character from six playable races, each with their own storyline. Build a fellowship by taming monsters and befriending non-player characters. Nearly 300 allies can be recruited for PvE and PvP.

Recruitment in Caravan Stories fosters extraordinarily strategic combat and character development. Each character brings their own skill sets and stats, forcing players to change the way they approach each battle. Stand against the tides of evil in parties of up to six creatures and allies. Plumb the depths of formidable dungeons and team up with players to conquer gripping open-world raids.

In a peaceful world replete with lush environments, the Enigma arrives. From this mysterious gate, a flood of demons pours forth, tainting the once beautiful lands. Before the Enigma can poison the world with darkness, players will need to uncover the truth behind its appearance and save the world from being shrouded in shadow.

Unexpected danger awaits—different beasts spawn throughout the day based on the intricate time flow system, further immersing players in a dynamic world. Thankfully, Spectator Mode lets would-be champions prepare for these challenges and learn from more seasoned adventurers by witnessing their raid groups and strategies.

“Caravan Stories is a new-style MMORPG that can be enjoyed by all users, on many platforms across the world,” said Masahiko Takeuchi, Director of Caravan Stories for PS4. “We are so excited to bring this grand story, filled with a vast world, memorable characters, and limitless expression, to PlayStation 4 adventurers in North America. We can’t wait to work with our passionate fans to continue improving the game and building endless stories within our world.” 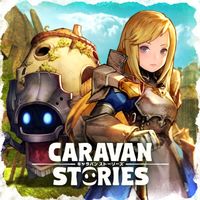