Compile Heart has today made a surprise reveal for Azur Lane Crosswave, in which the flagship of the German-based Iron Blood fleet, KMS Bismarck, is getting added to the game's playable roster. This reveal coincides with news for the original Azur Lane mobile game a new event starring Bismarck is scheduled to begin soon.

Since our last article, Compile Heart has also been frequently updating the official webpage with more ships that are joining the game's roster.

Azur Lane Crosswave for PlayStation 4 is set to release first in Japan on August 29. An English localization has also been announced and will be available later in 2020. 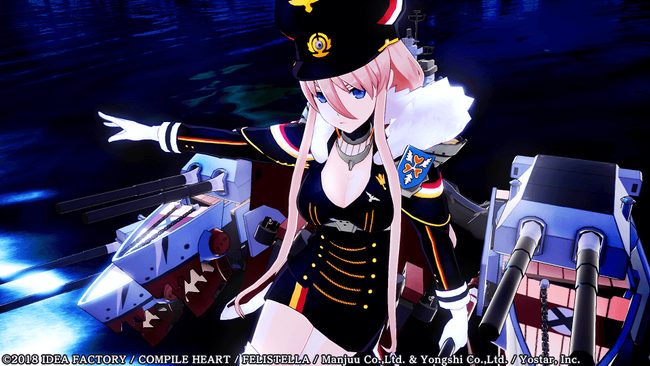 Although she is the leader of the Iron Blood fleet, she disappeared from public scene after official battles against Hood and Rodney of the Royal Navy. She observes the Sirens' movements after they appeared in the world, and she succeeds in incorporating Siren technology into her fleet after contacting a certain person.
Many of her reactions are done in quiet and cool manners, so nearby people may misunderstood her as being cold-blooded, but she actually has a heated passion hidden inside her.
When the Joint Exercise opens, although she took a passive stance on getting the Iron Blood to join, a clever persuasion from Kaga of the Sakura Empire and a further push from her younger sister (Tirpitz) made her stand up again and appear in the public scene after a long time. What will she preach about through the Joint Exercise...?

Bismarck's sub-story
Bismarck ended up getting isolated with Rodney due to Enterprise's plan. What business does Rodney have with her? And can Bismarck get out unscathed in the end...?