Square Enix has released a new trailer for Oninaki showcasing the game's Daemon system during combat.

The gameplay footage shows Kagachi shifting between different Daemon familiars in battle, each of which represents a different weapon type such as swords, spears, or axes. Kagachi's combat style and skill capabilities change depending on the current weapon equipped.

Square Enix Japan has also announced that the game will release in Japan on August 22 and has revealed the box artwork. The Western release date has not been confirmed and is still slated in the Summer window.

Oninaki is set to release on Nintendo Switch, PlayStation 4, and PC vis Steam. In case you missed it, you can find a trailer and screenshots introducing the cast of characters here.

As players journey as Kagachi, a young Watcher who ushers Lost Souls into the next world, they will bond with and harness the power of Daemons, a special type of Lost Soul who could not be reincarnated. These powerful souls will assist the player in battle, with each Daemon representing a different weapon type. Players will be able to manage their Daemon’s skills and switch between them in real-time to deal devastating blows to their enemies with unique attacks and power up skills. 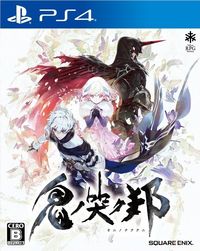