As part of their BitSummit 2019 line-up, Dangen Entertainment has announced Bug Fables, an adventure RPG developed by Moonsprout Games coming to PlayStation 4, Nintendo Switch, and Steam this year.

Find an overview and some screenshots below via Dangen Entertainment. [Update (June 1): A new trailer has been posted.]

Small Heroes. Big Adventure. Bug Fables is an adventure RPG following three heroes, Vi, Kabbu, and Leif, as they embark on an epic quest in Bugaria in search of treasure and immortality.

The game combines flat objects with 3D physics as the player jumps and utilizes the heroes’ unique abilities to solve puzzles and stun enemies while exploring a variety of unique, colorful areas. Battles are turn-based and with timed button inputs that can enhance your abilities.

Hidden within the foliage of nature lies a small but prosperous continent - Bugaria. Insects from all over the world travel to it in search of the treasure scattered across it. The most sought after of these relics is The Everlasting Sapling! Eating just one of its leaves can grant even immortality! In search of this ancient artifact, a brave team of explorers - Vi, Kabbu, and Leif - will travel across many different environments. In order to do so, they must work together to clear puzzles, defeat strong enemies and help the general bug populace! 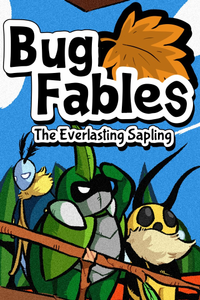