Square Enix has announced that Dragon Quest Builders 2 will receive a free demo on PlayStation Network on June 27. Nintendo simultaneously announced a demo for the Nintendo Switch version on the same date.

Square Enix also posted a lengthy E3 trailer for the game, which showcases a variety of the game's tools, building mechanics, battles and more.

Square Enix also offered the following information regarding purchase bonuses for the PlayStation 4 version. For specifics on the Nintendo Switch version, go here. 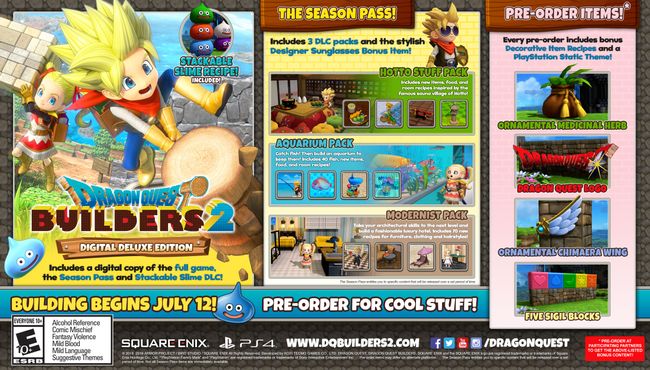 Digital pre-orders:  Will receive in-game Sigil Block recipes for players looking to decorate their buildings with icons denoting the sun, stars, moon, water and soul, as well as a DRAGON QUESTBUILDERS 2 PlayStation®4 system theme.
PlayStation®Plus users: Users from July 12th will receive a Pixel Decoration of Legendary Heroes as well as a Portrait of Legendary Heroes recipe.Already included with the Digital Deluxe version of the game, the Season Pass will include three DLC packs released after launch, giving access to recipes, hairstyles, clothing and all-new areas to explore. The Season Pass will also be available separately at launch for $20.99. Players who acquire the Season Pass will receive the three below packs as they are released, and the stylish Designer’s Sunglasses to protect their eyes from the bright sun at launch on July 12th.

Dragon Quest Builders 2 is set to release in North America and Europe on July 12 for Nintendo Switch.