Following up on the official reveal of Tales of Arise at E3 2019, Bandai Namco has shown a new version of the trailer at Tales of Festival 2019 held today in Yokohama, Japan. This trailer adds Japanese voices and confirms that the names of the title's protagonist and heroine are Alphen and Shionne respectively.

Other than confirming that Yusuke Tomizawa is the producer for this brand-new Tales Of game, the trailer reveals that the characters here are being designed by Bandai Namco Studios' very own Minoru Iwamoto, who is also working as the art director here. This RPG will also have some animation produced by ufotable.

You can watch the new improved trailer of Tales of Arise and read the character introductions right below. This RPG will be released for PlayStation 4, Xbox One, and PC via Steam worldwide in 2020.

Tales of Arise takes place in a solar system containing the two neighboring planets of Dahna and Rena. The inhabitants of Dahna have always paid reverence to their planetary neighbors on Rena - a planet they can clearly see in their sky - as a land of the righteous and divine. For the people of Dahna, legends and lore about Rena and its inhabitants have been handed down for countless generations, and through time, have become facts in their minds that have actually masked a cruel reality for the people of Dahna.

For 300 years, the people of Rena have ruled over Dahna, pillaging the planet of its resources and stripping its people of their dignity and freedom. Tales of Arise begins with two people, born on different worlds, each longing to change their fate and create a new future for themselves and perhaps their people. Featuring an original cast of characters, a dramatic storyline, dynamic combat, breath-taking environments, with some classic Tales Of elements included; Tales of Arise marks a new beginning for the famed JRPG franchise.

A young man wearing an iron mask who has lost his memories and pain. The encounter with Shionne becomes a chance for him to take the Flame Sword as he throws himself into the battle, aiming for the liberation from Rena.

A girl cursed by the "Thorn" which deals intense pain to people touching it. For a hidden objective, she joins hands with Alphen and goes into a battle where she revolts against her brethren in Rena. 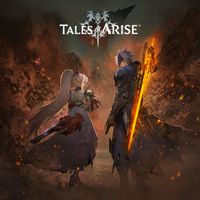